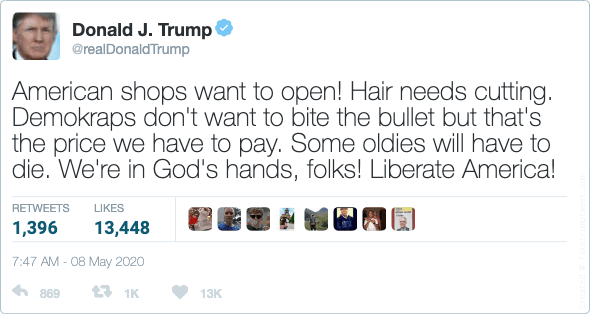 One of my friends, who is very active in the skeptical movement, recently shared this alleged tweet from President Trump:

“American shops want to open! Hair needs cutting. Demokraps don’t want to bite the bullet but that’s the price we have to pay. Some oldies will have to die. We’re in God’s hands, folks! Liberate America!”

The image she shared made it look like an actual tweet from the President, and it reads like something he would write.  My friend believed it, and while we’ve had our disagreements, her judgment is usually sound when it comes to sharing articles on Facebook.

In this case, however, the tweet wasn’t real.  It came from a blog post on the Laughing in Disbelief blog.  Now there were clues that the article was satire— like the slogan “Liberte, Egalite, Absurdite;” the cartoonish religious figures in the sidebar; and a link to the about page saying that it is a satirical blog.  But to someone casually skimming the post, and the blog in general, it looks real.

Now, as I mentioned, my friend is normally careful about what she shares on her Facebook page, and she has a firm understanding of skepticism.  Yet she didn’t initially see that this post wasn’t real.  Based on the comments to the post, she wasn’t alone.

While the writer might have felt the satire was obvious, the truth is that it’s not always obvious. Most people skim posts and don’t take the time to check all the links in a post.  So it is possible that anyone can miss that an article is satirical and take it literally.

Over the years, I’ve experienced people who thought a Babbler article could be real.  Eight years ago, I wrote about the Lost Tribes of Israel returning to Earth, and a commenter asked if it was real, adding: “Either way, I’m amazed that this is truly happening. Why hasn’t this received more media time, if any?”

Today, the World Health Organization says there’s a “pandemic of misinformation” around the COVID-19 outbreak.  Judging from the posts in the community Facebook groups I follow, I can believe it. Even people, like my friend, can end up unintentionally spreading misinformation.  I don’t fault her for it, as she did acknowledge her mistake, which is a very good thing.

Knowing about this human tendency, whenever I write one of my fictional articles, I have to ask myself if the article has the potential to be believed.  Even when I’ve put the word “fiction” in the title, some will miss that.  I can’t stop everyone from believing a work of fiction, but I do make an effort to minimize the risk.

“Satire” is not an excuse to post anything you want and laugh at anyone who mistakes it for reality.  Writers, myself included, should do their best not to contribute to the misinformation that is already running rampant on the Internet.  I may not always succeed, but I will make the effort.

I hope the author of Laughing in Disbelief will make the effort moving forward as well.

Note:  All opinions expressed are my own. They do not reflect the views of any organization I work for or of my employer.  Feel free to leave a comment here or in the Bolingbrook Babbler Readers Group.