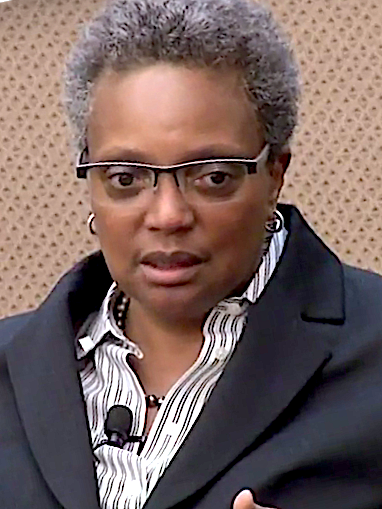 “It’s was horrifying!” said Liz, who asked that we not use her last name.  “First I saw one of her memes, then I saw her floating outside my window!  I’m never stepping outside again!”

Ellen, who did not say her last name, claims she saw an apparition of Lightfoot as she was leaving to go shopping:

“I opened the garage door and saw her floating in front of my car.  She demanded to know where my mask was.  I said I hate wearing masks and (Mayor Roger Claar) said I wouldn’t be arrested if I didn’t wear one to the store.  I told her it was none of her business because I’m a Bolingbrook resident.  Then her eyes glowed red, and I suddenly started floating in the air.  She said because Chicago and Bolingbrook are in the same recovery region, it was her business to make sure every Bolingbrook resident practiced social distancing. Now I will wear a mask every time leave my house.  I don’t want to see her ghost again!”

Andrew Z. Stiller claims Lightfoot appeared when he was about to post in the Bolingbrook Politics Facebook group:

“She asked me why I was about to share a video.  I said I liked what the video had to say, so I wanted to share it.  She said the video was filled with lies, and posting the video would only put more Bolingbrook residents at risk of infection.  I said I have a First Amendment right to post whatever I want in Bolingbrook Politics.  She pointed at my computer and it shorted out.  Then she said she had a Second Amendment right to protect the residents of the Northeast region.  The weird part is my computer works again, so I can’t sue her.  Chicago politicians are so evil!”

Not all the encounters were described as horrifying.  Paula, who asked that we not use her last name, claims Lightfoot complimented her:

“I was working remotely from home when she appeared.  I was startled, but she said not to be afraid.  She just wanted to thank me for not commuting to Chicago for my job.  She said I was saving lives.  Then she added that even people who don’t die from COVID-19 can suffer long term consequences from the virus.  I thanked her and she disappeared.  Maybe this is a sign that the suburbs and the City of Chicago can work together.  After all, the virus can’t tell the difference between Chicago and Bolingbrook.”

When reached for comment, Lightfoot laughed and said: “Stay home.  Save Lives.  Stop calling me.”

A receptionist for Claar said he was on a conference call and could not be disturbed:

“I guess some residents have moved up from Coronavirus nightmares to Coronavirus hallucinations.”

In the background, a man who sounded like Claar said: “Governor, maybe you should reconsider your regions.  We’re not the same as Chicago.”

“Exactly,” said a man who sounded like Naperville Mayor Steve Chirico.  “We’re Naperville.  We have a reputation to uphold.  Quarantining with Chicago and Bolingbrook is not part of that reputation.”

“You just had to phrase it that way, didn’t you?”