The first three chapters of my latest book are on the Amazon webpage. (Click on the ‘Look inside’ link.) The publisher’s webpage is here and you can also buy it from any major retailer. (Note: This will be the new top post for a while. Later posts are below.)

Unfortunately, progressive Nina Turner lost the primary race for the Democratic nomination for the seat held by Marcia Fudge. She lost to Shontel Brown, a candidate who was backed by the corporate wing of the Democratic party as well as wealthy Republican donors and the Israel lobby.

Turner, 53, had been co-chair of Bernie Sanders’s presidential campaign and is a leading advocate for poor and working class voters. She supported conditioning military aid to Israel, in stark contrast to Brown, 46, a Cuyahoga County councilperson, who embraced Israel in her campaign and was rewarded with substantial donations from pro-Israel groups.
…

While Israel was seldom mentioned in mainstream coverage, it was certainly a component of the race. While not a public supporter of the Boycott, Divestment and Sanctions movement (BDS), Turner has consistently defended the right to boycott. After Israel attacked Gaza this spring, she tweeted support for Palestine.

In contrast Brown positioned herself as a staunch supporter of the Israel. She condemned the BDS movement, opposed calls to condition military aid, and referred to the country as a “bustling democracy.” During the attack on Gaza, that killed almost 70 children, she asserted that Israel has the “right to defend itself.”

This is undoubtedly a boost for the more right-wing elements in the Democratic party led by Hillary Clinton, James Clyburn and the rest of the party establishment who want to prevent progressive policies being adopted such as Medicare for All and a more even-handed treatment of the Israel-Palestine issue. They are determined that the one-party nature of US politics, where both Democrats and Republicans differ on just a few social issues while maintaining a pro-war, pro-corporate, pro-Israel consensus, continue.

There are many political reasons why Andrew Cuomo is a terrible governor of New York even excluding his abusive practices. He had seemed to weather the storm over allegations of multiple sexual harassment allegations by taking a Trump-like stance of refusing to acknowledge anything. But the latest report from New York’s attorney general Letitia James about his abuse should, by all rights, end his career. Even since the wide range of allegations about men sexually abusing women over whom they had power and Trump’s infamous tape about how he can grab women’s genitals and get away with it because he was famous, no one should be surprised at what such people do. But the latest report (thanks to Death to Squirrels) still manages to evoke disgust. (The Executive Summary (pages 2-6) describes the main allegations.)

One of the weird things in the report is the way he asks so many women to find dates for him. He comes off not just as a creep but also as pathetic and needy.

This news story about the release of the report summarizes its findings.
END_OF_DOCUMENT_TOKEN_TO_BE_REPLACED

In these days of Zoom meetings, I have seen people exploit the Zoom feature that allows you to use their stock backgrounds and also allows you to create your own to create the most exotic and even bizarre backgrounds. I myself, being the old fuddy-duddy that I am, use just the boring but real background of my living room. 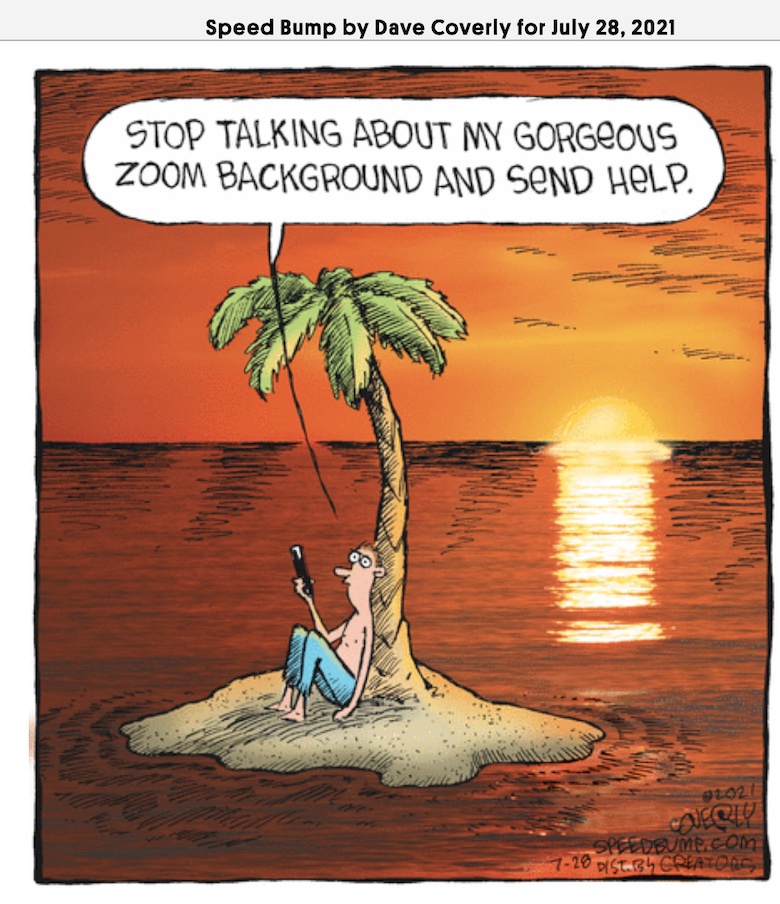 It is good to note those moments during the Olympics when sportsmanship won out over the intense drive drive to win.

Days later, at the Olympic Stadium, Gianmarco Tamberi of Italy and Mutaz Barshim of Qatar found themselves in a situation they’d talked about but never experienced — they were tied.

Both high jumpers were perfect until the bar was set to the Olympic-record height of 2.39 meters (7 feet, 10 inches). Each missed three times.

They could have gone to a jump-off, but instead decided to share the gold.

“I know for a fact that for the performance I did, I deserve that gold. He did the same thing, so I know he deserved that gold,” Barshim said. “This is beyond sport. This is the message we deliver to the young generation.”

After they decided, Tamberi slapped Barshim’s hand and jumped into his arms.

“Sharing with a friend is even more beautiful,” Tamberi said. “It was just magical.”

The actor has a persona of an enlightened person so it was surprising to read an interview in which he claimed that he had just recently stopped using a slur term for gays after his daughter had upbraided him about it. His defense for using it was that the term “was commonly used when I was a kid, with a different application”.

He said his daughter had taken him to task after he used the word in a joke at a dinner party. “She went to her room and wrote a very long, beautiful treatise on how that word is dangerous. I said, ‘I retire the f-slur!’ I understood,” he said in the interview.

Damon, who in 2017 apologized for saying sexual assault was “a spectrum of behavior” after a similar outcry, immediately came under fire from LGBTQ+ activists.

The admission is quite astonishing. If he was expecting praise for his newfound understanding, he was mistaken. The general reaction has been “What took you so long?”

Damon was born in 1970, one year after the Stonewall riots which brought to the public’s attention the way that the LGBT community was harassed by the police and the public and acted as a catalyst for the advancing of gay rights around the world. By the time he was a ‘kid’ of (say) ten years of age, the movement for LGBT rights was well underway. But even if he missed it and his family and peers did not correct him as a child, surely by the time he reached adulthood and entered the workplace he had to personally know gay people and be aware that such slurs are hurtful and not acceptable? We are long past the stage when people can use their childhood as an excuse for obliviousness about things like this.

The person who comes out well is his daughter for rebuking him. The only positive thing that emerges about Damon from this episode is that he raised a child who is willing and able to challenge parental authority when they say do something wrong. Most of the time children are more enlightened about changing social mores than their parents and we would do well to listen to them.

I usually only watch the track events at the Olympics and that too only after it is over. I was watching the finals of the women’s 100m and noticed that the top three medal winners (all from Jamaica) all had long ponytails, with the silver medalist’s hair an eye-catching yellow and red.

I wondered whether having long hair might slow them down just a fraction due to increased wind resistance. It is true that resistance is not as significant as in swimming where everyone wears caps. But in an event where one-hundredth of a second can make all the difference, wouldn’t sprinters want to minimize drag as much as possible?

Since almost all the eight finalists had long or longish hair, I have to assume that they have concluded that it does not matter and that does seem to be the case.

Flowing locks increase air resistance insofar as they boost a runner’s surface area. More hair creates more opportunities for friction between the runner and the air, so a full-headed athlete would have to work harder to maintain the same speed as a bald one. And since Olympic sprinters are already close to maxing out in terms of effort, any situation that requires them to do more work has the potential to extend their times.

But hair is pretty light, so athletes know it’s the styling, not the quantity, of their tresses that could dash their hopes. Hairdos like ponytails, braids, and or buns, which comb the mane behind the neck, have little effect on overall surface area, while hair that sticks out from the sides of the head increase it (and might also whip into the runner’s eyes).

All the sprinters had their hair in ponytails that stayed behind their backs and did not swish back and forth.

I had not been aware of this documentary that dealt with the massive abuse of women gymnasts in the US until three days ago when I was reading about all the turmoil in gymnastics. I watched it yesterday on Netflix and was just horrified that what it revealed was far worse than I had imagined. I do not follow gymnastics but was aware that Dr. Larry Nassar had been convicted and sentenced to essentially life in prison for the sexual abuse of girls under the guise of treating them for injuries incurred during their routines. What I had not been aware of was the vast scale of the abuse that goes on all over the country, with over 50 coaches having had allegations made against them about their predatory behavior but with the governing body USA Gymnastics doing little or nothing about it and even allowing them to move around. It reminded me of nothing so much as the Catholic Church and the Boy Scouts. It seems like just as those two organizations provided an environment congenial to predators of boys, gymnastics did the same with girls.
END_OF_DOCUMENT_TOKEN_TO_BE_REPLACED

The origins of languages are buried deep in time and teasing out why they have the features they do is not easy and hence often speculative. For those of us whose language is English, one mystery is the way things are spelled, which is a source of humor for comedians like Eddie Izzard.

When it comes to covering up the abuses by the government’s military and security services, all political partisan divisions disappear and the two parties become as one in prosecuting those people who have the temerity to leak information. This has happened repeatedly with whistleblowers and the government’s weapon of choice is the Espionage Act, something that strips defendants of most of the legal protections they are normally have access to and makes getting convictions easier and punishments harsher.
END_OF_DOCUMENT_TOKEN_TO_BE_REPLACED

I have described before that I think a good philosophy to live by is “Try not to be a jerk”. While it is more limited in scope and not as elegant or high-minded as some of the more well known ones like treating others as you would like them to treat you, it has the advantage that jerk behavior is easily recognizable in pretty much every situation and thus can be more easily avoidable if one wants to.

So naturally my attention was caught by this article that had the title How to Raise Kids Who Don’t Grow Up to Be Jerks (or Worse). It consists of an interview with Melinda Wenner Moyer, the author of a book that discusses how to raise children to not be jerks. (The book’s title is actually How to Raise Kids Who Aren’t Assholes which is pretty much the same thing.)

Moyer says that the key is helping children develop a theory of mind.
END_OF_DOCUMENT_TOKEN_TO_BE_REPLACED