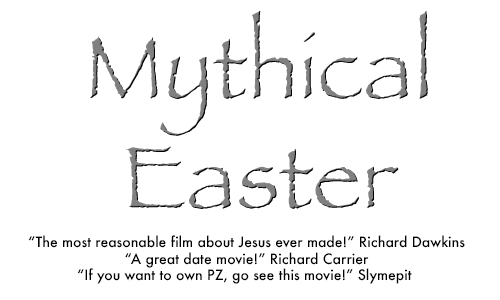 A proposed online ad for “Mythical Easter,” a movie currently filming in Bolingbrook.

Despite the threat of protests, anonymous sources confirm that the village of Bolingbrook will allow the controversial movie “Mythical Easter” to be filmed in Bolingbrook.

“Mayor Mary (Alexander-Basta) wants to revive Bolingbrook’s economy,” said one of the sources, who wished to remain anonymous.  “She thinks film production is a great way to generate local jobs and to promote Bolingbrook.  We’ll even tolerate protesters as long as they don’t destroy property, and they spend their money at any of Bolingbrook’s fine establishments.”

In the scripts obtained by the Babbler, “Mythical Easter” is the story of a “brave genius atheist scientist” named Richard who discovers that a Christian billionaire is using his technology to send actors into the past to create the “Mythical Jesus.”  The character is possibly based on Richard Carrier, a blogger and academic well known for his arguments against the existence of Jesus Christ and his questionable conduct towards women.

In the script, the billionaire, named David, explains his plan to the scientist, named Chuck:

David: Don’t you understand?  If the world finds out that Jesus never existed, there will be chaos!  Churches will go out of business. Conservatives will stop supporting Israel because there’s no point in trying to bring about the second coming of Christ if He never came to Earth in the first place. The Intellectual Dark Web will rule the world! I can’t let that happen!”

Richard assembles a “crack team” of scientists and mercenaries to defeat’s Chuck army of “mythical terrorists.”  In one scene, Richard orders a scientist to send a scroll back in time:

Larry: Why are you sending this scroll two weeks before the team’s arrival?

David: To let all the single women know when I will be in Jerusalem and what times I will be available!

In the climactic scene, Richard and Harriet confront the woman about to perform the role of Mary Magdalene:

Richard: You cannot deny my reasoning!  Join us, and we will expose the myth of Jesus’ existence once and for all!

Mary Magdalene Actress: Oh Richard!  My faith tells me I must play this role, but my heart is drawn to your superior intellect.  Your young soul makes my old soul feel hot!

Richard: It is perfectly reasonable to desire me.

Mary Actress: Oh Richard! You have a well-endowed intellect!

Some local religious leaders accuse “Mythical Easter” of being a“mockbuster” version of “Black Easter,” a movie about terrorists traveling back in time to kill Jesus.  The director of “Mythical Easter,” Andy Z. Silverman, denies the accusation and claims the movie is not anti-Christian.

“Sure, all my heroes are fearless atheists, and all my villains are fearful Christians.  Yes, my atheist characters survive because they love life, while my Christian characters die because they foolishly believe the afterlife is better. However, that doesn’t make my movies anti-Christian.  A single Christploitation movie does more harm to Christianity than all the pro-atheist films combined!  Go after the production companies that make these boring drama-free Christian movies, and let me film my atheistploitation movie in peace!”

Silverman denied being related to former atheist activist David Silverman and would not confirm rumors that Michael Shermer and Carrier are producers.

Crews will be filming outside the Weathertech and Ulta headquarters.  Spokespersons for both companies refused to confirm if they paid any promotional fees to the production company.

The Department of Paranormal Affairs confirmed they deported a time traveler back to the year 2049:

“She wanted to participate in the May 14th  Bolingbrook 2049 forum,” said Alice Z. Williams, spokesperson for the department.  “Unfortunately, both the New World Order and the Illuminati specifically forbid interactions with time travelers.  Yes, she could have offered concrete suggestions for how to prepare for the next 30 years- But rules are rules.  The forum participants will have to settle for educated guesses and wild speculation.”

“Suspect X,” said Williams, “Made it very clear that she would not be a positive, affirming presence at the event.  The trustee-elect contacted us, and we apprehended her before she could do more damage to the timeline.”

When pressed for specifics, Williams said the time traveler claimed that Bolingbrook in 2049 was dealing with several waives of climate refugees, many of them from the Southwest region of the United States.  Bolingbrook was still in debt due to repeated reconstruction from floods and tornados.

The Bolingbrook economy will be suffering due to the loss of storefronts, the collapse of the agriculture in Illinois due to droughts, and numerous polar vortexes.  Thousands of retirees will migrate back to Bolingbrook, putting a strain of Bolingbrook’s social services.  This will be compounded since townships were abolished in Illinois.

Trustee-elect Michael Carpanzano denied being visited by a time traveler:  “You shouldn’t write stupid stories like this.  You should be telling your readers that Bolingbrook 2049 is the only serious forum for residents to plan the future of Bolingbrook.”

“Actually,” said a woman.  “Residents can also attend our Memo to the Mayor forum on May 15.  It’s free, and starts at 7 PM, when most residents can attend. We feel that you shouldn’t have to choose between your job and the future of Bolingbrook.”

Carpanzano pulled a rubber carp out of his jacket pocket then held it up to her face.  He then faced this reporter and said, “As I was saying…”

Jesus unharmed after being debunked by atheist

By Wendy Onofrey
Webmaster for the Bolingbrook Babbler.

ApexTV recently posted one of their interviews with a time traveler.  This traveler showed what he claimed was footage from the year 2045.  I jumped to the part where he reveals the video.

ApexTV asks their viewers to decide for themselves what they think about this video.  Here are my thoughts:

I have a problem believing this one.  What do you guys think?

Bolingbrook officials held a Memorial Day ceremony to remember the participants in the Bolingbrook Time War. The war started on April 6, 1984, when invaders from the year 3000 AD launched a surprise attack against Bolingbrook.

“For two days, outsiders tried to destroy our village,” said Bolingbrook Mayor Roger Claar.  “Maybe they were future inhabitants of Cook County: we may never know.  But we do know, that when Bolingbrook united around a single leader and did exactly what that leader said without question, Bolingbrook prevailed against a technologically superior foe!”

The Bolingbrook Time War lasted for two days.  The time-traveling army was not aware of the existence of Clow UFO base, and its advanced defenses.  This advantage allowed the Village to put up some resistance against the invaders.  Over the course of the war, it is believed that 90% of Bolingbrook’s residents were killed, along with 50% of Naperville’s residents, and 40% of Romeoville’s residents.

Though technically no one died, each Memorial Day, village officials hold a secret ceremony in which they lay a wreath in honor of the victims “that once were” and remember a war that most residents have forgotten.

During this year’s ceremony, Claar, without attribution, stated that the invaders wanted to prevent the rise of a “future great leader” who would come from Bolingbrook:

“I don’t know who that great leader will be, but this war shows the importance respecting all great leaders in Bolingbrook.”

Claar then looked at Trustee Robert Jaskiewicz and said, “Jaruzelski!”

Jaskiewicz came to the podium. He said that the lesson to be learned from the Bolingbrook Time War is not to follow leaders blindly:

“From what former Mayor Ed Rosenthal has told me, I see the lesson of the Bolingbrook time war like this:  Even though the air was filled with death rays and drones, there were still different viewpoints on what to do.  Ed took the time to listen to those voices, including the voice of a trustee who wouldn’t stop talking about the wallpaper in the mayor’s bathroom.   Once Ed listened to those voices, he made the best choice and saved Bolingbrook.  Today, there are many voices in Bolingbrook, and we shouldn’t be afraid to listen to them.”

After the ceremony, the trustees walked towards the subway train going to Village Hall.  Claar stopped Jaskiewicz.