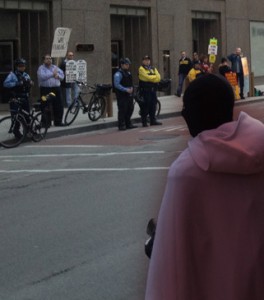 An alien photographed at an Occupy Chicago protest.

The Bolingbrook Babbler is a work of Internet fiction that I started in 1998. I write from the perspective of an old-school tabloid based in Bolingbrook, IL, that has been in business since 1965. Similar to the old Weekly World News, it covers the “unbelievable truth” about Bolingbrook. These truths include:

• Bolingbrook is the home of the world’s largest urban UFO base.
• Weredeer roam the forest preserves.
• Skeptics are working with aliens to bring about a new age of science and reason.

Are characters really exposing the unbelievable truth? Are they merely mistaken? Are they lying? That’s up to you to decide.