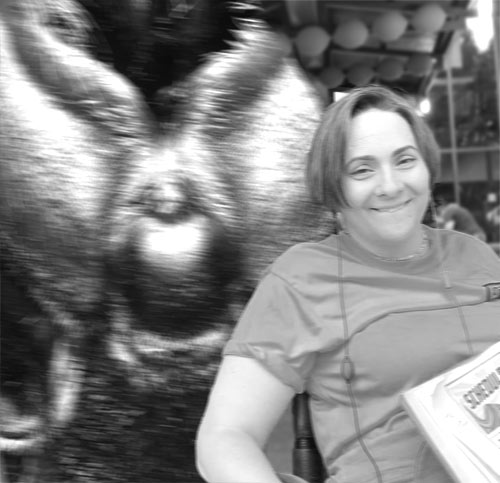 An alien meets with one of the Bolingbrook Pride volunteers.

Last Sunday, Bolingbrook Pride held their second annual Pride and Puppies Picnic.  This time it was at Village Hall. Organizers estimate that over one thousand people attended.

The following is a team report from the picnic:

A pack of were-dogs offered free pets to Pride and Puppies attendees.

“Bolingbrook is our family,” said Becky, who asked that we not use her last name.  “We love our family and we love it when they bring people to love. We let them pet us, and they feel our love.  This pride event is about love.”

One of the attendees who petted Becky told her a story about her own dog: “I grew up with a dog named Pepper.  Whenever I cried, Pepper would be there for me.  I loved her.  But then my parents threw me out of the house when they found out I was queer.  I never saw her again.  Now I own a home with my partner, but whenever I’m in the backyard, I think of Pepper, and how much she would have loved it.”

“This is why we’re here,” Becky said, speaking in the dog language.

Elsewhere, a man openly asked why Bolingbrook wasn’t hosting a Straight Pride event.  Bo, a were-dog Welsh Terrier, jumped up and down in front of the man:  “I’ll tell you why!  Because gay relationships are outlawed in 70 countries.  In this country, lawmakers want to use ‘Religious liberty’ to allow discrimination against LBGTQA+ individuals. There was even a hate crime against a Barrington teen a few days ago.  Straight is the default sexuality. Every day is your pride day.  Either let my friends enjoy their day, or leave this space.”

“I think this dog is trying to talk me,” said the man.  “I can’t understand you.  You’re just barking.”

Bo moved away and barked: “Hate does not make you great!” 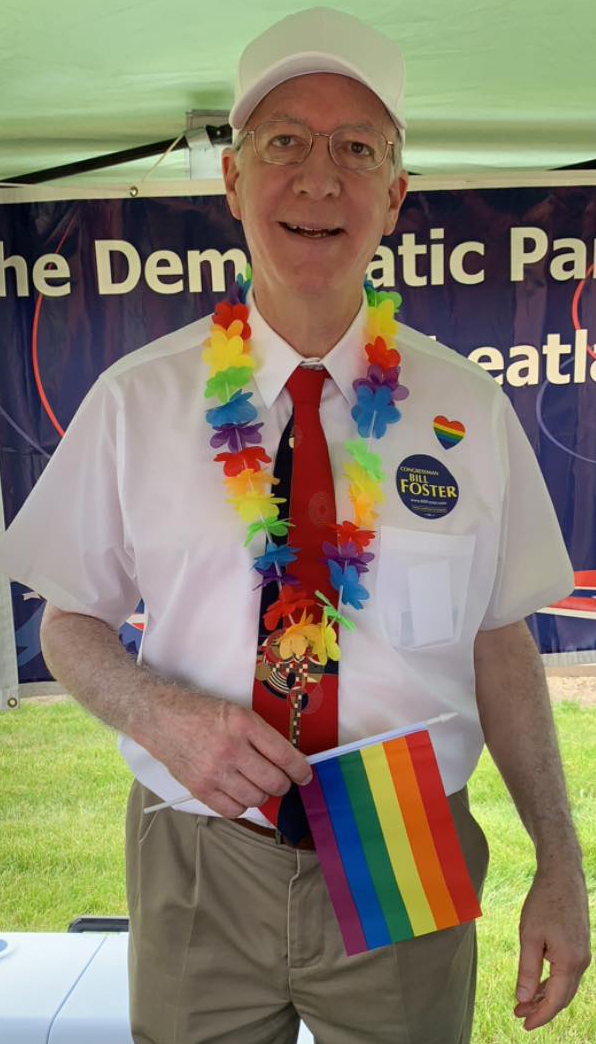 US Representative Bill Foster promised alien attendees at the Pride Picnic that he would continue to work to enact the Interstellar Commonwealth’s “Declaration of Gender and Orientation Rights.”

“I agree with the declaration,” said Foster.  “I co-sponsored the Equality Act, but that’s just the beginning.  I won’t stop until every gay human on Earth has all the rights outlined in the Commonwealth’s declaration.  No one should be shamed for being LBGQTA—Did I get all the letters?”

Foster then denounced the Illuminati: “Ever since they declared war on the New World Order, the level of hate has increased around the world.  Donald Trump is their blunt instrument to destroy civilization and create chaos in the world.  They say they want freedom, but that’s a lie.  They want to destroy all opposition and then impose their own dictatorship on the world.  Well, I’m not going to let that happen.  I proudly support science, reason, and the New World Order.  E Pluribus Unum!”

Most aliens said they enjoyed talking to Foster.

“Humans like him give me hope for the future of this planet,” said Zoplopgost, who asked that we not identify its homeworld.

An unidentified alien tried to dump shaved ice on Foster but was restrained by a Man in Black.

“Why did you try to attack me?” asked Foster.

“No!  That’s what you do if you hate a politician, and I don’t endorse that kind of wasting of food.”

Ten attendees to the Bolingbrook Pride event say they went on a “wild” UFO ride with Mayor Roger Claar.

“Roger really is the most important Mayor in the galaxy!” said an anonymous attendee.

All of the attendees were selected at random and raised into a UFO.  Claar then reassured them they would only be gone for about 15 minutes, and he was going to take them on a short interplanetary tour.

As the attendees sat down, Claar told them that before the first Pride and Puppies event, he was skeptical.

“I thought it was a plot by the Cook County Democrats to corrupt the fine residents of Bolingbrook.  Then my daughter assured me that gay people are Okay.  They just want the freedom to be who they are, and love who they want.  Or not love.  I’m still learning about that ‘A’ part.”

The UFO then flew to the far side of the moon and viewed the UFO Mother Ships hovering over the moon.  A tour guide, who said he was a former US Space Marine, and former

“Do you know that most alien species have more than one sex and more than one gender identity?” Asked Blake, who asked that we not use his last name.  “It’s like our minds are so small that we can only think of two genders, but the universe is more creative.  Who knew?”

The craft then traveled to Mars.  Claar told them that they couldn’t land because the Martian Colonial Government has quarantined humans.

“They think we’re infected with memes,” said Claar.  “Whatever that means.” 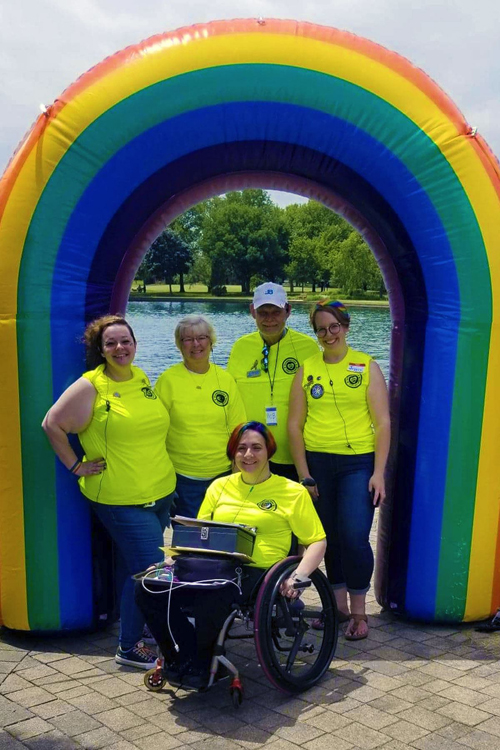 On the way back to Bolingbrook, a fleet of alien fascists contacted Claar, and said they wanted to help him “purify Bolingbrook.”  Claar told them to turn over control of their ships to Clow Traffic Control.  Claar then continued to talk about how no one in Bolingbrook understood alien cultures better than he did.

Several minutes later, the alien fascists contacted Claar. They said their ships were flying towards the sun, and they couldn’t regain control.  Claar asked why that was a problem.

“I don’t care what Bolingbrook looks like.  Just as long as I am in charge!”

“But what about our freedom of speech?” asked one of the aliens.

“I draw the line at oppositions parties in Bolingbrook,” replied Claar.  “And your fascist party is way, way, way over the line!”

“But you endorsed Tr—”

Claar turned off the audio and said: “I don’t see Bob sending fascists into the sun.  Do you?”

When reached for comment, Trustee Robert Jaskiewicz replied, “I suppose I could say something about Roger and Uranus, but I’m kind of busy volunteering at the picnic right now.”

A receptionist for Claar said he was away and did not want to take any calls.

In the background, a man who sounded like Deputy Mayor Michael T. Lawler said: “Thanks, Mike.  Now, I just need one more trustee to join me.  Fortunately, I brought some straws—”

“I volunteer!” said a woman who sounded like Trustee Mary Basta. “As a tribute to—”

“Thank you Jesus!” said a man who sounded like Trustee Sheldon Watts.

“Roger already made a major donation,” said Lawler.  “And we’re letting them hold the event outside of village hall.  So you and I are just going to stand near the edge of the crowd, and talk to the concerned residents.”

Carpanzano added: “I’m going to have pictures of me taken with the volunteers.  Because I care!”