Bolingbrook’s Clow UFO Base announced it is banning all UFOs from displaying political ads on the outside of their spacecraft, and from showing them during abductions.

“I don’t know what (Mayor Roger Claar) was thinking,” said acting administrator Aplodoxage Glomox during a press conference.  “Actually, I have my suspicions, but this is not the place to talk about them.” 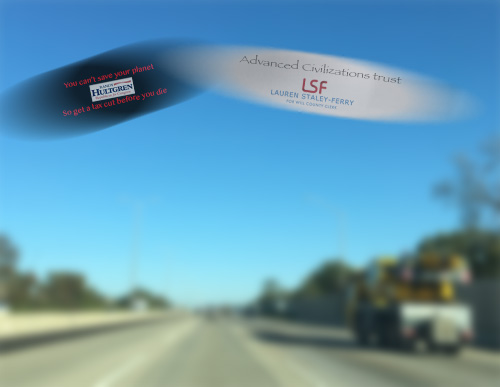 A rare photo of two UFOs with political ads. They were photographed flying over I-88.

Since 1989, Bolingbrook’s Department of Interstellar Affairs has allowed aliens to sell political advertising space on their spacecraft, provided they did not violate visibility rules.

“Depending on the time of day, a craft may be visible to the naked human eye,” said Paul Z. Coker, spokesperson for the department.  “All the visibility windows vary, but they’re all less than a minute long.  A lot of political campaigns will pay good money for those few seconds.”

Clow UFO Base staff will not provide a list of ad buyers. They insist that all the human buyers have permission to contact aliens.  Sources confirmed that off-world “political influencers” have bought ads, but refused to provide more details.  Ads could only be paid for using Interstellar Credits.

Glomox said the display ads are inconsistent with the Interstellar Commonwealth’s policy towards Earth:

“We are supposed to be subtly guiding humanity towards full membership in the Commonwealth.  Political ads on our spacecraft are as subtle as the rings of Saturn.  Besides, there are only two types of ads:  Either ‘this candidate is perfect’ ads or ‘this candidate is evil’ ads.  Neither are helpful.  Some humans worship us. So we have to take our role as guides seriously.”

Posslot, a resident of the Barnard’s Star solar system, is disappointed in the ban: “Sure I made a fortune off of the ads, but they’ve also helped my research.  Running (Representative Peter Roskam’s ads) proved to me that you can raise your constituents’ taxes all you want as long as you call yourself a Republican and call your opponent a Democrat.”

Stizaleek, a resident of Pluto, said she was going to stop putting ads on her UFO anyway:  “I like Lauren Underwood, and I wanted to help her.  So made my own video ad, and displayed it on my craft.  One night I flew over her house and sent her a message telling her about my ad.  At first, she didn’t know what to think of about my craft, but then she replied that if I was going to run ads, she couldn’t talk to me.  Something about being against the rules to coordinate with political action committees.  Well, I don’t want to be a political action committee of one.  So I stopped running the ads.  I still hope she wins.”

A receptionist for Claar said he was out of the office for the rest of the week.

In the background, a man who sounded like Trustee Robert Jaskiewicz said: “Charlene, did you hack my Facebook account, and were you the one who told (Trustee Rick Morales) that I wrote that fake post?”

“Charlene, what’s going on?” asked the man who sounded like Jaskiewicz.

“Roger asked me to help Sheldon get ready for next year’s campaign.  So I decided to help toughen him up by locking him in a room with Kanye West.”

“Does Roger know you’re doing this?”

“He said that as long as I get results, he doesn’t care how I do it.”

The man who sounded like Watts yelled: “Charlene, get me out of here!”

“I’ll let you out if you refuse the holy spirit.”

“You’re so judgmental, Sheldon!  I identify as amoral.”

A man who sounded like West said, “You can’t leave now.  I still need to talk to you about Drew Peterson.”