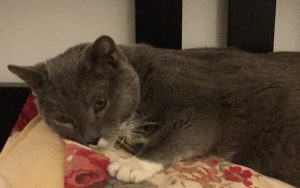 File photo of a suspected werecat.

Christine, who asked that we not use her last name or her hometown, said androids placed a Roskam sign on her front yard:  “I told them there must have been some kind of mistake.  I said I wasn’t a Roskam supporter.  Guns popped out from the back of one them.  It aimed them at me and said, ‘Now you are.’”

Christine called the Roskam campaign. After objecting five times, a human staffer took the sign away.

“He said I couldn’t tell the fake news about this.  Well, the Babbler is real news, so I don’t think he meant to exclude you guys.”

Peter, who lives in Barrington, claims he saw a werecat supporter of Casten.  According to Peter, the werecat peed on his Casten yard sign.  When Peter complained, the werecat changed into a human:  “After I got over my shock, she said, ‘Don’t worry.  I’m just marking the sign so Roskam’s machines won’t bother it.’  She talked about how much she loved Sean and that she was finally glad that an independent thinking scientist and businessman was running for Congress.  Then she said Peter believes the voters of his district are pack animals, and the werecats were going to let their voices be heard during this election.  If Sean can inspire werecats to support him, imagine what he can inspire our Congress to do?”

Julie, a resident of Elgin, claims to have seen werecats and androids while driving late at night:  “I saw these giant half human, half cat, creatures running beside a truck with robots attacking them. It turns out the truck had Casten yard signs, and the robots were trying to destroy the signs.  I swear I recorded it on my phone, but the video vanished when I tried to upload it to YouTube.  Maybe this is why there are so few Bigfoot and UFO videos online.  YouTube is secretly banning the real videos!”

A volunteer for the Roskam campaign denied that Roskam had an army of androids:  “That’s not true.  Let me get my notes.  I think there’s a special list of talking points for your paper.  I can’t just call you ‘fake news.’”

In the background, a man who sounded like Roskam said: “So while Sean was trying to bore me to death, I looked at his file.  His donation record was pitiful.  He honestly expected me to listen to his lecture for free.  So I walked out of the meeting.”

“How rude,” said another man.

“Yes.  He doesn’t even know the right way to shuffle notes during a debate.  Anyway, who are you representing today?”

“Today I am representing the Society of Recovery Audit Contractors.  Every day we protect Medicare from orthotists and prosthetists who want to be paid for their devices.”

“They’re cutting Medicare for me.  I like your client already.”

“I also brought you a gift worth less than $5.”

“Which you wrapped in money!  Impressive.”

A receptionist for the Casten campaign denied that werecats were helping the campaign:  “Not true, and Sean is in a meeting.  You can’t talk to him.”

In the background, a man who sounded like State House Speaker Michael Madigan said: “You didn’t ask for my permission to run, now you want my help?”

A man who sounded like Casten said, “I’m running for Congress, not the state house.  I don’t need your permission to run.  You’re welcome to help me if you want, but you don’t have to and I’m not asking for your help.”

“Damnit!  That’s not how this works.  Let me ask you again.  Why should I support you?  I’m tempted to endorse Peter Roskam because his tax plan imposes a federal tax on Illinois taxes.  That’s genius!  So give me some good reasons why I should support you instead?”

“You should support me because I won the Democratic Primary.”

“Fine.  Some scientists say we are dangerously close to the Earth becoming a hothouse.  I will fight to prevent that.  Peter Roskam won’t.”

“So it means our environment won’t be able to sustain our economy and our civilization.  It means no more Chicago, no more Cook County Democratic Party, no more Illinois Democrat party, no more Illinois, and an end to your political dynasty.  I won’t play your games, but I will fight to create a sustainable environment where Lisa’s grandchildren have the opportunity to continue your legacy.  I think Peter Roskam wants to destroy the environment to spite you and to win Donald Trump’s favor.”

After several seconds of silence, someone dialed a phone number.  The man who sounded like Michael Madigan said, “Release the endorsement flyers.”

Are you registered? (Non-fiction) » « Occupation of Clow UFO Base ends: Interstellar Commonwealth takes over Bolingbrook’s UFO Base (Fiction)