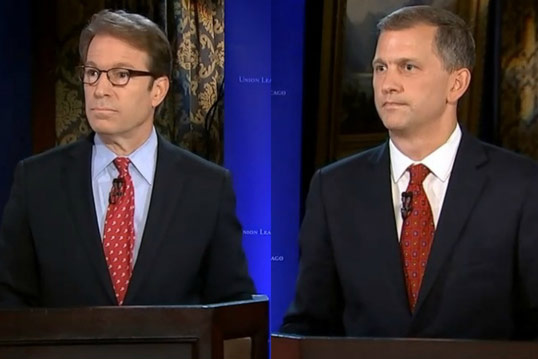 According to a transcript obtained by the Babbler, the operative was supposed to plant a device in Rep. Peter Roskam’s podium to calm him, and another in Sean Casten’s podium to make him angry and agitated.  The operative mixed up the podiums.

“I thought they were going to seat Sean Casten stage left, and Roskam stage right,” protested the operative.  She added, “I probably should have known that Fox would put the Republican stage left to get more attention from the viewers.  Still, it was a simple mistake.”

Claar, who has been a leader in the Illuminati since 2016, replied, “Your ‘simple mistake’ may have cost us a useful stooge in Congress.  Peter has done so much to tear down our government.  We needed him to look like a calm leader and Casten to look like a panicked frat boy.  Do you know how much it will cost us to flood the Sixth District with subliminal ads to make up for what you did?  I’ve already invested $2000 in the Roskam campaign.  Now I’ll have to invest more.  Are you really a New World Order double agent?”

In the transcript, she knelt before Claar and begged for forgiveness.  Claar said he could have her executed, but he would show her mercy.  He ordered her to drive the “Gauntlet of Boredom” and not to return until she completed 100 laps.

Sources within the Chicagoland Illuminati say the operative was last seen driving towards the construction site at Weber Road and trying to get on to I-55.

A young man replied: “I’m with the Congressional Leadership Fund.  Oops.  I mean the Roskam campaign.  I’m putting up this free yard sign for you.”

“I don’t live in his district, and a yard sign here doesn’t help him. Don’t you know the boundaries of the Sixth district?”

“I don’t care.  They just pay me, and right now they’re paying me to put up yard signs in every donor’s yard.”

“Do you know what happened the last time someone tried to decorate my home without my permission?”

A staffer at Casten’s Barrington’s campaign headquarters refused to comment about the Illuminati:  “Fake stories don’t matter.  What matters is Sean won the debate, and we’re celebrating.  The Barrington Battle Station is ready for victory in November!”  Dance music played in the background for a few seconds then suddenly stopped.

A man who sounded like Casten said, “Guys!  Gather around me.  Now, I’ve never had someone doing victory dances for me, and I’m flattered.  But its way too soon!  Peter is hurting, but he’s not finished.  There’s too much money in his Wheaton War Room to ignore.  We have to keep canvassing and calling residents.  Did you see me shaking hands with the counter-protesters following the debate?  If I can shake hands with activists who traveled 30 miles to yell at me, you can meet with the friendlier Republicans in our district.”

On a video chat, an out-of-district Republican staffer canvassing with Roskam said: “I thought I was just signing up to talk to people about Congress.  I didn’t realize I was going to work for a political campaign.  Peter is starting to scare me.  You know how upset Peter is about this election?  He stopped spending time with his maps!  Now he’s actually out talking to residents.  He says he’s talked to 20,000 residents, but this is only the fifth one I’ve heard him talk to.  I don’t think ribbon cuttings should count.  Oh my God!  You’ve got to see this.”

The camera turned to show Roskam standing on the porch of an irate resident.

“Look at this Sean Casten tweet,” said Roskam.  “It’s not true.  He deleted it rather than issuing a formal apology and dropping out of the race.  He said words matter.  This tweet shows who Sean really is!”

“Words do matter,” she replied.  “For starters, there’s no such thing as an ‘average median.’  The median income here is below $100,000.  Your plan is skewed towards constituents who make more than that.”

“Don’t believe everything you read.  You know Steve Strauss in Plainfield, right?”

“Good.  Steve owns Fries BBQ and Grill.  He said my tax plan will allow him to give his employees a raise.  Sean wants to—  Hey!  What are you doing on your phone?”

“You’re going to trust Google over me?”

“Yes, and even if you told me the truth, overall wages have dropped since your tax bill was enacted.”

“I’m tired of this toxic environment Democrats have created.  I’m trying to be bipartisan, and they’re running candidates against me.  Didn’t you watch the debate?  Sean said abortion is just like gallbladder surgery.  Is that insane?”

“You’re not a psychologist, and I’d rather have a congressman who thinks of abortion as a medical procedure than one who would use his wife’s stillbirth to avoid talking about his past mistakes.”

“If you had your way, miscarriages and stillbirths would lead to criminal investigations.  It was terrible what happened to both of you, but it would have been worse if the police investigated your wife for prenatal neglect and abuse after the stillbirth. Would you have liked that?”

“Don’t listen to the liberal media.  Look.  I’ve stood up to my party and earned the endorsement of the American Chemistry Council for my work protecting the environment.”

“You voted to let coal companies pollute waterways!  You’ve always said one thing, and done another by voting against it.  You give politicians a bad name.  Now get off my property and don’t touch my Casten sign.”

The woman flipped off Roskam and slammed the door.

“I am one of the most powerful men in Congress.  I am on the Ways and Means Committee. I serve the real interests of this district.  Let me keep working in Congress, goddamnit!”