Members of the Village Board attended a ribbon cutting ceremony for Bolingbrook’s newest business, American Engagement.  The company, according to its press release, “aggressively promotes the interests of our clients on the Internet and restlessly pursues those who oppose their interests.” 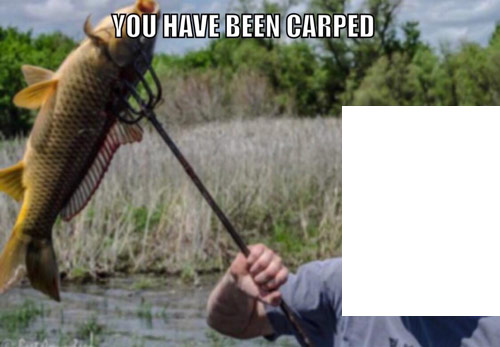 “Carped” meme created by a Bolingbrook troll farm. (The Babbler staff choose not to show the subject’s face because he is not a public figure.)

Bell thanked the mayor and trustees for attending the grand opening.  “Before my parents gave me my startup funding, they said that no one was better than the Russians at meme generation and forum engagement.  I replied that not only could Americans compete with the Russians, we could provide a better service than they can.  They gave me the money.  Roger gave me the opportunity, and here we are.  I’m proud to be a Bolingbrook business employing Bolingbrook residents.

After the ribbon cutting, Bell took the trustees on a tour of the facility, which was once a warehouse.  According to Bell, the facility is open 24 hours, and employees are paid to monitor and participate in thousands of social media groups and Reddit communities using specialized accounts.

“Each specialized account is maintained by at least three employees, providing 24 hours of continuous engagement on behalf of our clients.  All of our employees are legal US residents.”

“Why are you so hostile towards local businesses, Bob?” countered Claar.

Bell introduced the board members to an employee who did not say his name.  He said hi, then took pictures of Trustees Deresa Hoogland and Maria Zarate.

“Thanks.  I needed more chick pics.”

Bell chuckled and said, “He’s going to make both of you Internet famous.”

In addition to “forum engagement,” Bell said AE also produces memes.  He then showed them their “Carped” meme:

“This is the first of what we hope will be many successful memes.  You should see the engagement numbers in Bolingbrook Politics and Bolingbrook Rants and Raves.”

“Wait a minute,” said Claar.  “You know this is a picture of one of my supporters.”

“Yeah, and he shouldn’t start arguments with people before blocking them.  Roger, this is all in good fun.  The important thing is that if we can create engaging content about a little-known resident, imagine what we could do for or against politicians or annoying activists.”

Bell then showed the board a meme they plan on releasing next year.  It was a painting of Trustee Sheldon Watts arm wrestling with Will County Board member Jackie Traynere.  The spirits of deceased Trustee Leroy Brown and deceased former Mayor Ed Rosenthal are pushing Sheldon’s hand.  A demon and Chicago Mayor Rahm Emanuel are pushing Jackie’s hand.

“Are memes like this really good for democracy?” asked Jaskiewicz.

“Bob, we told you not to criticize Sheldon because he was mentored by Leroy.  Have you no respect for the dead?”

“We’re a republic, not a democracy,” added Bell.

At a reception following the tour, a woman walked up to Bell:  “Hi.  I’m a new village employee.  As part of my new hire testing, I’m supposed to give you this check.”

Bell accepted the check.  Jaskiewicz looked at Claar and frowned.  Claar took the new hire aside:

“You were supposed to wait until after Bob left.”