By Wendy Onofrey
Webmaster for the Bolingbrook Babbler 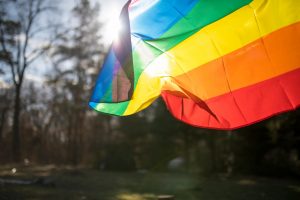 On the eve of the Bolingbrook Pride Picnic and Puppies event, I’d thought I should point out this article from fellow Freethought member Trav Mamone:

It’s Pride Month. A time to celebrate all things queer and trans, remember those who lost their lives in the struggle for human rights, and explain—again—to straight people why there’s no Straight Pride Month. This false equivalency boils down to the common misconception that LGBTQ people like myself are celebrating something we didn’t achieve through hard work, like being born with a certain sexual orientation or gender identity. What people fail to realize is we’re celebrating something we achieved: all the accomplishments the LGBTQ rights movement has made so far, and that we choose to love ourselves in the face of bigotry.

You can read the rest here.

As Mamone also points out, there is still more work to be.  Last year Sarah Sanders said the administration believed that business have the right to refuse service to gays.  President Donald Trump is currently trying to ban transgender individuals from serving in the military. Kansas and Oklahoma now allow adoption agencies that receive taxpayer money to deny adoptions to gays for religious reasons.  In Illinois, Jeanne Ives almost won the primary race for Governor despite running a flagrantly transphobic ad.

So tomorrow, let’s celebrate the first Pride event in Bolingbrook.  It is a significant milestone that should be celebrated.  Let’s also remember that there’s more to be done and that the progress that’s been made still needs to be defended.