From the Babbler:  This article is from our sister publication, the Red Deer Reporter. It’s based in Red Deer, Alberta, Canada. 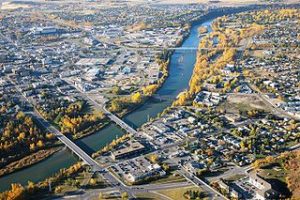 Josephine, who asked that we not use her last name, described her encounter with one:  “I was sitting in my favorite bar when this weird man walked up to me and sat next to me without my permission.  He said he was a member of the ‘Wild Alberta’ party, but they weren’t going far enough.  He wondered if I thought that the US should invade Alberta so (President Trump) could make it great again.  I told him that invasions kill poor people to make rich people richer.  I also told him that I used to be a member of the United Conservative Party, but then I started reading Against the Grain and the  Reprobate Spreadsheet.  Now I am a much better person. He left.  Come to think of it, he did have an odd accent.”

Paul, who asked that we not use his real name, said a tractor-trailer truck pulled up next to him.  The driver stepped out and offered Paul an assault rifle.  Paul declined:  “I have enough guns.  The driver said that he was going to help ‘Texas North’ resist the ‘French Occupational Government.’  He asked if I would take up arms to defend the English Language.  I said people from Quebec are fine, but I would take up arms against the United States.  They steal our cheap medicine and demand that we say ‘eh’ for their amusement.  I would love to plunder their shale oil so Alberta could control the global market.  The driver took the gun away and left without saying goodbye.  How rude.”

Dena Z. Franson claims she encountered a sniper on her ranch:  “I saw this fake cow in my field.  Figuring it was a joke, I decided to approach it and throw it out.  When a got about a meter away, a man inside said, ‘Moo.  La moo.’  I stopped, and he said it again.  Then he said, ‘I am a Canadian cow.  Moo!  La Moo!’  I said that it is a balmy 15 C degrees outside, and he might overheat inside that fake cow.  That’s when I saw a rifle barrel come out of the cow’s mouth.  He used some unpleasant language before saying, “I’m here to make America again, and I’ll shoot any Canadian who refuses to submit to our President.  La Great!  La Shoot!  La Kill!  La Trump!’  I ran away.”

Police and Royal Canadian Mounted Police officials said they were not aware of any US military presence near Red Deer.  They did suggest that if any resident encounters US operatives, they should run to safety and call 911.