Anonymous members of Representative Peter Roskam’s election campaign are spreading rumors that his opponent, Sean Casten, is a space alien. 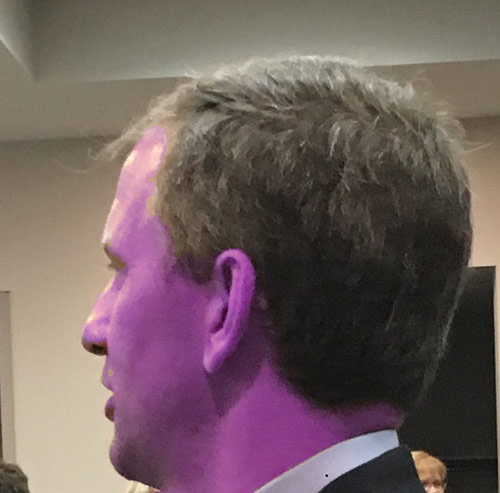 The Roskam campaign claims this photo is proof that his opponent, Sean Casten, is an alien.

“There’s something not right about Sean,” said one source.  “He sounds smart, but he’s too smart.  Like, a highly intelligent alien pretending to be a human.”

“Exactly,” added an anonymous campaign member.  “Rock musician?  Scientist?  Father?  Business leader?  Athlete? Doesn’t it all seem too good to be true?  Like an alien pretending to be the perfect political candidate?”

When asked for evidence that Casten is an alien, they produced an “enhanced photo” of Casten taken at a candidates forum in Palatine, IL.

James, who asked that we not use his last name, or state his position in the Roskam campaign, conceded that the photo was weak evidence:  “But if you combine this photo with our questions, enough people might believe he’s a space alien.  The rabble, I mean the voters, will turn against Sean, and we’ll win!”

Brian Z. Buckman, A spokesperson for Bolingbrook’s Department of Interstellar Affairs, said their investigations back in 2007 prove Casten is human:  “While you can’t prove a negative, we were able to confirm his birth on Earth, his human physiology and his educational background.  The background information on Sean’s website is correct, except he doesn’t mention the years he worked at Clow UFO Base.  I can say that he had excellent employee evaluation scores, but that is all I can say.”

Another member of the Roskam campaign, who asked to be called Anne, said charges are based on “political reality,” and not on “science-based facts.”

“You have to look at where we stand.  The good news is most people in the Illinois Sixth Congressional District are familiar with Peter.  The bad news is most of those same people hate him.  Fortunately, the rabble —I mean voters— know very little about Sean.  So Peter’s ordered us to throw everything at him.  Not just the kitchen sink, but the plumbing too.  That’s why we’re trying to create a political reality in which Sean is a space alien.  It might cost him votes, and those votes could be the key to our victory.”

Anne said the “enhanced photo” of Casten will be distributed to paranormal websites, and to InfoWars sometime next week.

A phone call to the Casten campaign was answered by a staff member.  “Alien?  Sean is talking to an IL06 resident and doesn’t have time for your nonsense.”

In the background, a man said, “Who cares if the planet dies?  I only care about making my business profitable.”

A man who sounded like Casten said, “You do realize there are no profitable companies on a dead planet?”

The other man paused, then said, “I never thought of it that way.”

A call to the Roskam campaign was also answered by a staff member.  “If people want to believe Mr. Casten is an illegal liberal space alien, we won’t stop them.”

“Roskam?  You’re the one who keeps interrupting my family dinners with your ‘phone-in’ town hall meetings.”

“I’m better known as the leader who cut your federal taxes.”

“You wrote that plan?  Thanks to you, I can no longer deduct state and local taxes, and your plan threatens Social Security and Medicare.”

“You’re welcome.  Anyway, I’ve selected your household to be the only one I visit this year.  You should be honored to be the only commoner I will talk to this election cycle.  I want to hear the thoughts of a real American like you.”

This was followed by the sound of a slamming door.