Bolingbrook’s Department of Interstellar Affairs insists that its advertisement on the Tabby’s Star Dyson Sphere is not political. 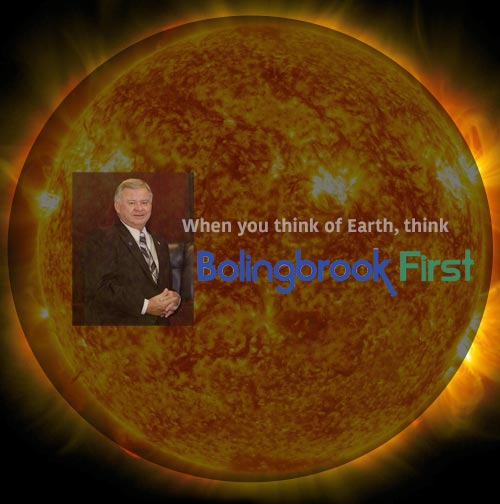 Bolingbrook’s ad is featured on the Tabby’s Star Dyson Sphere.

Doug C. Baker, a spokesperson for the department, explained:  Sure, the phrase, ‘When you think of Earth, think Bolingbrook First’ can seem like an ad for Mayor Roger Claar’s political party.  That is not the proper view.  Interstellar visitors have a choice of hundreds of UFO bases to visit.  We’re just asking them to think of Bolingbrook first.  Our mission is to promote Clow UFO Base, and that’s what we’re doing!”

In addition to the slogan, the advertisement also features a picture of Claar.  The font used for “Bolingbrook First” is the same font that the Bolingbrook First party use for their logo.  Both fonts are the same colors, which are also part of the official colors for Bolingbrook.

While the village denies it is an ad, Bolingbrook United, Bolingbrook’s other political party, has their doubts.  Jean Z. Burns, who works for Bolingbrook United’s office at Clow, believes it is a political ad:  “Roger’s insulting our intelligence!  Of course, it is an ad.  Roger just finished delaying a trustee (Robert Jaskiewicz’s) swearing in, and he’s already starting the 2019 campaign.  It stinks that he can post ads on a Dyson sphere, and we can’t.  Speaking of stink, when are we going to get rid of the cat pee smell around here?”

Loikxdz, the administrator of the Tabby’s Star Dyson Sphere Preservation Society, denies the ad is political.  “Ads help us preserve one of the oldest Dyson spheres in the galaxy.  Roger is very generous with the Department of Interstellar Affair’s promotional budget.  This money will help us educate the galaxy about our historic megastructure.  Oh, did you know that they built this without using lasers or radio signals to communicate?  Incredible isn’t it.  I’m sure that’s what’s confusing your low-level astronomers.  Oh, our Dyson sphere has the largest and highest resolution display screen in the galaxy.”

When reached for comment, a receptionist said he was busy and could not be disturbed.

“Darn, I have the wrong SOP manual.  I need the one for calls from the Babbler.”

In the background, a man who sounded like Claar said, “Charline did a great job on the press release for Trustee Leroy Brown’s recognition as a Rotary Club Paul Harris Fellow.”

A man who sounded like Trustee Rick Morales said: “I thought the Valley View school district wrote that press release.”

“I go wherever I am needed,” said Charline.

Claar then said, “I’ve asked Charline to write a press release about your upcoming speech to the Bolingbrook Jaycees.”

“Yes,” said Charline.  “I will say that you are the first non-member in this area to be named a Mary Scholar and are going to be inducted into Shawn’s Circle of Power!  The highest honor the Bolingbrook Jaycees can bestow upon a non-member.  Don’t worry.   Roger will still be a 33rd and 1/3 degree Jaycee so you won’t outrank him.”

“Charline, all I’m doing is giving a presentation on the lost art of balancing a checking account.  It sounds like you’re going to lie about my speech.”

“Impossible,” said Charline.  “The weak lie.  The powerful mold their truth onto reality.  You’re not weak.”

“I would appreciate it if you would go along.”  Said Claar.  “These releases will help us in our campaign against Bolingbrook United.”

Morales sighed.  “If I disobey you, Roger, Bolingbrook will descend into anarchy.  I’ll do it!”

“Good.  Charline, when you are done with Rick’s press release, I need you to write about my visit to Saint Francis of Assisi.”

“Rick, I’ve always been a patron.  Thanks to Charline, now I will be able to add the word “saint.”