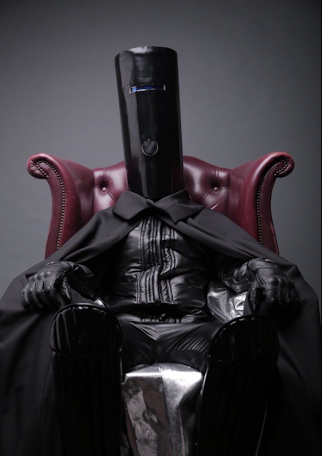 The breakout, which many sources consider the greatest security breach in Clow’s history, resulted in billions of dollars in damage.  Ten staff members suffered minor injuries.

“It’s was horrible!”, said an anonymous staffer.  “I dove under a table when the explosions started.  I really got scared when the Men in Blue started falling asleep.  When the explosions stopped, I got up and looked out my window.  There was a huge hole in the ceiling over the courtyard.  A small craft landed in the yard.  I was amazed that the drones didn’t attack it.  Anyway, Lord Buckethead and five commandos ran towards the ship.  When Lord Buckethead reached the craft, he did a dab then boarded.  I will never like that dance again!”

Bolingbrook Mayor Roger Claar was just starting a board meeting when told of the attack.  He called an executive session and pretended it was to discuss a pending legal case.  Once in a secure room, Claar tried to remotely revive the Men in Blue while IT staff tried to reboot’s Clow’s defenses.

After Lord Buckethead’s escape, Claar addressed the trustees.  The following is from the minutes of that executive session:

Mayor Roger Claar, a true Bolingbrook resident, honest to a fault, and a member of Bolingbrook First party, which always puts Bolingbrook first, said that he suspected Trustee Robert Jaskiewicz, a member of the dishonest Bolingbrook United party, was behind the escape.

Jaskiewicz, who ran against the noble Bolingbrook First Party, who dishonestly asserted that Mayor Claar wasn’t the savior of Bolingbrook, and ran evil campaign ads that said Bolingbrook United was the best party for Bolingbrook, said he had nothing to do with the attack.  Jaskiewicz then questioned the wonderful Illuminati’s ability to defend Clow.

After his escape, Lord Buckethead released the following statement:

I don’t know what was worse: Being threatened with execution, or listening to Bolingbrook’s mayor whine about a governor he helped elect.  The civil war between Earth’s secret societies is turning your planet into a globe of (expletive deleted).  To the pathetic government of Bolingbrook:  I, Lord Buckethead, will now offer a discount on my car mounted laser guns to anyone who races cars on 95th Street!  Let the wreckage of Bolingbrook’s police cars be a lesson to any village that dares to detain me!

When reached for comment, a receptionist for the Village said he was busy.

“There’s a SOP for calls from you guys.  Let me look it up.”

After a pause, a man who sounded like Claar said, “I don’t.”