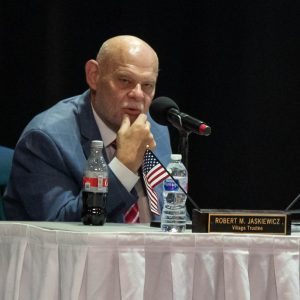 The New World Order and Interstellar Commonwealth representatives hosted a surprise party for outgoing Trustee Robert Jaskiewicz at Bolingbrook’s Clow UFO Base.  Jaskiewicz, a member of the opposition Bolingbrook United Party, was elected to the Village Board in 2017 as the first opposition trustee in over 30 years.  He decided not to run for reelection in 2021.

“You could have told me,” said a surprised Jaskiewicz.  “I would have prepared a speech.”

Jaskiewicz’s supporters and friends gathered at Bolingbrook United’s embassy, which will soon be converted to the Giamanco Law Partners’ Interstellar Affairs office.  Many embassy staff members thanked Jaskiewicz for his service:

“I was so depressed before you were elected,” said Beth Z. Wilkerson, a Covert Affairs Specialist.  “I loved helping our visitors, but I hated working for (Former Mayor Roger Claar).  Then you hired me and you helped me rediscover my love for covert work.  You cared for Bolingbrook and our guests more than your interstellar campaign fund.  Unfortunately, the voters didn’t replace you, so I’m taking a job at Rob Sherman UFO Base.  It just won’t be the same.”

Losgotus, leader of one of the Martian Colonies, made a rare visit to Earth to personally congratulate Jaskiewicz: “When we heard that Roger allied with President Trump and defected to the New World Order, I wanted to destroy Clow myself.  But when Bolingbrook selected you to serve on the board, I decided to spare Clow.  Your election was a message that not all humans in Bolingbrook were lost to Trumpism, memes, and the pandemic.  You saved Bolingbrook, and I will keep my promise not to destroy Clow for at least ten Earth years.”

Will County Board Member and New World Order representative Jackie Traynere praised Jaskiewicz for being the “People’s trustee.”:

“I know it was hard, Bob, but you represented the residents Roger ignored and belittled.  You fought for garbage toters, while Roger fought for Trump.  You visited residents while Roger visited Cuba. You stood up to the Space Force marines occupying Clow, while Roger bowed before them.  Your term as trustee may be history, but you also made history.  Whenever the First Party tries to gaslight Bolingbrook, we will remember your resistance!  You are irreplaceable, Bob, but Bolingbrook United will go on!”

Jaskiewicz later replied: “I want to thank Jackie for her kind words.  I may be irreplaceable, but I would have happily given my trustee chair to one of our candidates.”

Jaskiewicz thanked the attendees, and shared his favorite memories:  “I’ve seen aliens from all over the universe, but the most amazing thing I saw was the look on Roger’s face at the Pathway’s Parade when we marched past him with a garbage toter.”

He then warned the crowd that dark days could be ahead for the New World Order:  “As we speak, QAnon and her followers are trying to steal President Biden’s Arizona victory.  The Illuminati’s operatives are infiltrating the Democratic Party as we speak.  If Bill Gates’ idiocy doesn’t undermine our efforts to control COVID, the Anti-vaccination death cult will.  Unfortunately, we can’t forget about Donald Trump.  He may be out of the Illuminati, but he’s still dangerous.”

Jaskiewicz announced that he would be moving out of Bolingbrook to join the “Cat Koin” project.

“I won’t miss Roger’s attacks, (Mayor Mary Alexander-Basta’s) blowing me off, or Trustee Michael Carpanzano’s passive-aggressive positivity.  But I will miss all the great residents that made me proud to call Bolingbrook my home.  Bolingbrook is proof that E pluribus unum works!”

Alexander-Basta could not be reached for comment.  On a video call, her receptionist wished Jaskiewicz the best and looked forward to “four debate-free years in village hall.”

In the background, covert social media operative Charlene Spencer and Trustee-elect Troy Doris were sitting at a table.

Spencer said: “So we have a former mayor who not only supported Trump but raised money for him and other Republicans.  We have the current mayor who accepted an award from the same representative who gave an award to the Reverend Sun Myung Moon.  We have a supporter who almost started a fight with Black Lives Matter protesters behind village hall.  And we have a trustee who not only attended a fundraiser for Donald Trump but posed with him wearing a Trump tie.  It sounds very partisan and weird to me, but they insist they’re not strange or partisan.  Insist!  Yes, and I haven’t even touched on their great garbage debate.  Bolingbrook’s garbage collection used to be paid out of the village’s general fund, but last year they started charging residents directly.  Some residents ended up paying more, and, unlike most Chicago suburbs, Bolingbrook residents are not allowed to rent or buy garbage toters.  The opposition parties campaigned against this new arrangement.  One even called it a ‘garbage tax!’  How did the First Party respond? They said it’s not a tax!  It’s a fee!  So that makes it okay, and if you call it a tax, you’re a liar! I guess taxes are terrible and fees are fine.  You know, the more I research Bolingbrook, the more confused I get.  So tonight, we’re joined by First Party member Troy Doris, who will try to make sense of this for us.  Trustee Doris, you’ve been listening to me talk for the past 20 minutes.  Have I said anything wrong, or even slightly misleading?”

Doris dropped his jaw and blankly stared at Spencer for several moments.  He finally said: “You’re right.  I should be interviewed by Brian Williams instead of Rachel Maddow.  I need to master the short jump before attempting the sextuplet jump.”

Also in The Babbler: