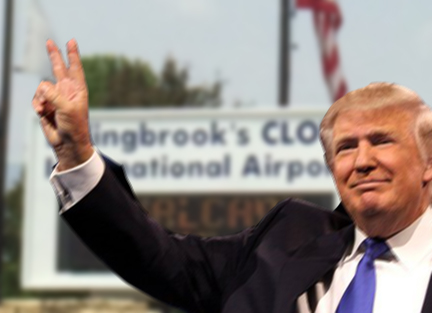 The Illuminati expelled Donald Trump tonight for his “huge failure to overthrow the United States government.”

QAnon, accompanied by members of the Illuminati’s Order of the Stairway, announced the expulsion:

“We gave him a storm, three people in the line of Presidential Succession in one building, and mostly cooperative Capitol Police officers.  All he had to do was start the Second Civil War.  Simple, right?  But he (expletive deleted) that up.  So we had no choice but to (expletive deleted) him over!”

The decision strips Trump of his Illuminati pension, access to Illuminati rituals, bans his social media accounts, and places him on the “Pedo” list.

“My followers will learn about Trump’s sexual crimes, but don’t worry.  They’ll also learn that Trump has a secret twin brother, Pete.  Pete is the hero they’ve actually been worshiping!  Pete is the one with the six-pack abs and cares about children.  The Q family will then know Donald has always been a loser and will drop him like Trump’s credit rating!”

QAnon then looked down at the floor:

“Hey, dad!  If you’re looking up at me, I’m screwing over a President.  When you meet Donald, he won’t know anything about you, but he’ll know about me!  That must burn more than the pitchforks poking you right now!”

A masked member of the Order expressed his personal anger at Trump:

“I nearly lost my public job because of Trump.  I had a long career, but my obituaries will always express my support for (expletive deleted) Donald.  I figured he could at least start the Second Civil War so I could rid California of garbage toters!  He failed, and he almost got my friend (Vice-President Mike Pence) killed.  Who knows what those zip tie guys would have done to him?  When we’re done with Donald, maybe they’ll go after him.  Ford!  I mean Fnord!”

President-elect Joe Biden, who is a member of the Illuminati and the New World Order, addressed the Order over Zoom:

“All of you know me as a bipartisan guy.  But here’s the deal:  Trying to kill Democrats and Republicans is the wrong kind of bipartisanship!  Killing delusional people is also wrong.  An Air Force Veteran turned against her country and lost her life for a lie.  Police loving civilians transformed into cop killers because of a lie.  Law and order supporters turned into rioters because of a lie.  For what?  Neither the Illuminati nor the New World Order got anything out of this insurrection.  Both sides lost.  We can’t go on like this.  Donald needs to suffer for what he did.  Then we need to come together and end the war between the Illuminati and the New World Order.  If we stop fighting each other, we can make a great world for everyone!”

“Whatever,” said QAnon, as she rolled her eyes.

“We need to talk,” Biden replied.  “And in the meantime, leave my son alone!”

No one answered the phone at the White House when this reporter tried to reach Trump for comment.