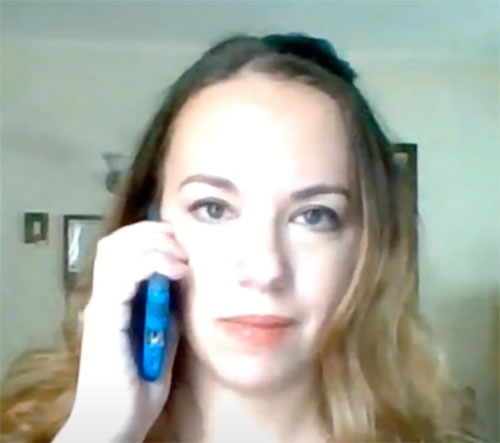 In a secret video presentation, Sarah Kendzior, author of The View from Flyover Country and Hiding in Plain Sight, told Bolingbrook’s weredogs it was okay to bite fascists, but it is more important to vote in the upcoming election.

“You can’t be complacent when fascism confronts you,” said Kendzior.  “You’ve got to punch Nazis, bite fascists, and tear apart Trumpism!”

Many of the weredogs howled in approval.

“Wow,” replied Kendzior.  “You guys are the most enthusiastic furries I’ve ever met.”  She added, “I’m not that concerned about Nazis getting black eyes, but at the same time, too much violence can lead to chaos.  That’s what authoritarians like Trump and Putin crave!  They’ll use the chaos and redefine groups like Antifa to be vague caricatures of evil.  They’ll be so vaguely defined, that anyone who opposes Trump, from anarchists to bloggers will be rounded up and labeled as Antifa.”

“Wait!” Cried out one weredog.  “Since when is being anti-fascist a bad thing?”

“Since our institutions failed to stop Trump,” replied Kendzior.  “Good God, I can’t tell you all the times I’ve tried to warn everyone about Trump’s international crime syndicate masquerading as a government.  They didn’t listen to me!  Okay, a lot of people listened to the Gaslit Nation podcast with Andrea Chalupa and me, and I was a regular on MSNBC.  It wasn’t enough.  Just look at all the free publicity Morning Joe gave Donald.  How could I compete with the Infotainment Media Complex?”

“We believe you,” said Brett, a weredog alpha.  “But is there anything we can do besides devouring the MAGA hats?”

“Um, let’s take this in a different direction.”

Kendzior then posted a link to the Gaslit Nation 2020 Survival Guide.  She said it was no accident that most of its suggestions involved electoral politics:

“Authoritarians want you to think you’re powerless.  That’s not true.  Voting is powerful.  Don’t give up the power of the ballot box.  Don’t let Trump’s plans to contest the election deter you.  Vote in such large numbers that he’ll have to choose between stepping down or openly abolishing our democracy.  Hell, don’t just vote.  Run for office.  Run for your school board.  Run for city council.  Run for dog catcher.  You can do lots of good things on the local level, and keep the fascists out of power in your community.  Sure it might feel good to punch a Nazi, but it will feel even better to teach children how to recognize and resist authoritarianism!”

“Even township government?” asked another weredog.

“Even if we think those Edgar County Watchdogs will save us from the township trustees?”

“I don’t know the whole story, but you can’t rely on others to save you.  You are the savior you have been looking for.  As Living Colour sang, “Only you can set you free!”

The weredogs cheered, but one asked, “But what if Trump steals the election?”

“Take to the streets, and try not to eat the National Guard soldiers.  Was that in character?”

Kendzior thanked the weredogs at the end of her speech.

When she logged off, many of the weredogs talked about running in the 2021 DuPage Township election.

A receptionist for DuPage Township said none of the Trustees were available for comment.

In the background, a woman who sounded like Trustee Alyssia Benford, said: “I trusted you when you said you have everything under control.”

“But you unleashed something almost unspeakable!”

“Escalation.  I turned on my party.  They turned on me.  I sent you guys to finish them off, now they’ve revived this group to finish me off.  Look!”

“Citizens for a Better Bolingbrook?  What is it?”

“An evil coven that will rain Internet hellfire upon us.  They answer to no one.  (Trustee Maripat Oliver) can’t control them.  (Will County Board Member Jackie Traynere) cannot stop them.  (Mayor Emeritus Roger Claar) was only able to exile them after years of conflict, but they’re back, and he can’t save us this time!  We can’t make them resign.  We can’t disrupt their meetings.  We can’t even sue them!  But they can inflict so much—”

“Don’t worry.  We have a web site and the backing of the Illinois Policy Institute.”