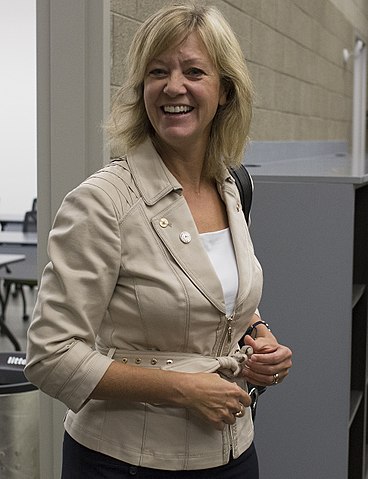 File photo of Jeanne Ives taken by the College of DuPage’s staff.

Canvassers claiming to be volunteers for Congressional candidate Jeanne Ives have been spotted outside the Sixth Congressional District.

“Door to door canvassing is bad enough during a pandemic,” said Liz, a Bolingbrook resident.  “Seeing one of her canvassers in Bolingbrook is scary.  Do they even know what office she’s running for?  For that matter, does Jeanne?  She talks so much about Illinois politics that I wonder if she thinks running to be (Governor JB Pritzker’s) boss?”

Andrea X. Parker, a resident of Naperville, claims a canvasser accosted her on her front yard:

“This guy tried to shake my hand.  I told him to keep his distance.  He stepped back but said that a judge ruled that we no longer have to practice social distancing.  I asked him how a judge could rule a virus out of existence?  He said Jeanne gave Trump a performance grade of ‘A,’ and that was all he needed to know.  I said that was all I needed to know about Jeanne.”

Wendy Lee, a resident of Romeoville, also claims an Ives canvasser visited her:

“I told this guy he was lost because I live in the 11th Congressional District.  He said Team China Carrier was assigned to my district.  Then he showed me a patch with one half depicting a US aircraft carrier, and the other half depicting a bat with the caption “China’s Newest Carrier.”  He said Jeanne’s son made the patch.  I told him to (Expletive Deleted) off.  First of all, it was disrespectful to the crew of the Theodore Roosevelt.  Second, it is racist to refer to COVID-19 as the Chinese Virus. Especially when there are more cases in the US.  Third, China’s upcoming carriers are nothing to laugh at.  That man just smiled and said, ‘Somebody needs a great big hug.’  I wonder how many people her campaign is infecting?”

Colby, a resident of Paris, IL, claims one of her former classmates tried to canvass on behalf of Ives:

“When I heard him saying I should resign my checkbook to Jeanne Ives, I lost it.  I said: ‘Billy Bo Bob, that doesn’t make any sense, and you’re going to get everyone in Edgar County infected and waste all those months we stayed at home.’  When he said he wasn’t afraid of the flu, I said this is worse than the flu and that Jeanne may sound like a downstater, but she’s really a Chicago politician.  He said he wanted to kill me, but he was going to tell the Edgar County Watchdogs on me instead.  I said the only thing he was going to do was get them killed.  Then I said he should stay off their website because they don’t even have the brains to understand all the law books they’ve been reading!”

A person who claimed to be a spokesperson for the Ives campaign would neither confirm nor deny the existence of canvassers:

“Jeanne Ives is holding a perfectly legal BBQ at our campaign headquarters, and there are no Chicago-style hot dogs here.  We are eating Oscar-Myer hotdogs with ketchup and we’re going to call it the Wheaton Dog.  Checkmate Chicago liberals!”

A person who claimed to be a spokesperson for Representative Sean Casten’s campaign  had no comment about the Ives canvassers:

“We are responsibly campaigning for Sean because he cares about the residents of the district and he believes in science.  Now if you’ll excuse me, I need to put on my biohazard suit before I deliver our yard signs.”

Space aliens will not enroll their children in Chicagoland’s schools due to COVID-19 (Fiction) » « Breaking News! Jackie Traynere announces candidacy for Mayor of Bolingbrook (Mixed)