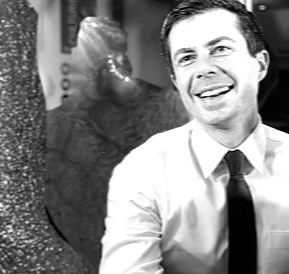 After attacking UFOs displaying ads for Joe Biden and Elizabeth Warren, a UFO crew loyal to Pete Buttigieg surrendered after meeting with him.

“The alien crew didn’t believe the reports of Pete suspending his campaign,” said Sheila Z. Blake, a spokesperson for the Palatine Police Department and Palatine’s Rob Sherman UFO Base.  “Thanks to Pete, we were able to bring this unfortunate situation to a peaceful end.”

The craft started its attacks Sunday evening.  Interceptors from all three of Chicagoland’s UFO bases attacked the craft.

An interceptor pilot, who asked not to be identified, described the aliens as fanatics:

“They kept saying that Pete’s confession speech was ‘deep fake’ created by the Russians to fool Americans into electing Joe Biden.  They thought if Biden gets the nomination, then Trump would win the election.  I said the polls show that all the Democratic candidates beat Trump.  Plus Pete’s withdrawal might mean no candidate gets a majority of delegates.  The commander accused me of being fake news and tried to destroy me.  I never thought of Pete as having fanatical followers.  Let alone alien fanatical followers.”

After a long aerial dogfight, Sherman UFO Base told the crew that Pete Buttigieg wanted to meet them.  The crew agreed to land at Sherman UFO Base.  Interceptors from Bolingbrook’s Clow UFO Base at first kept attacking the craft but were eventually recalled.  According to sources inside Clow, Mayor Roger Claar choose to recall the fighters because he did not want to risk “dragging Bolingbrook into a protracted Democratic delegate fight.”

When the craft landed, Buttigieg entered the craft and let the crew scan him.  Once they confirmed his identity, Buttigieg told that he really did suspend his campaign and he did not approve of their “terrorism.”

“But,” said the commander, “How could you stop fighting?  You convinced us to dedicate ourselves to find the progressive middle.  You said that we must change the ways of your Washington DC, but not go down the path of Bernie Sanders.  You said Joe Biden was the path of failure.”

“Yeah, I said a lot of things during the election,” replied Buttigieg.  “But the fact is I can’t win, and Joe offered me a really good deal.”

“Yes.  If Joe is elected, I will become the ambassador to the Interstellar Commonwealth.  Remember, the path of moderation requires compromise.  An unwillingness to compromise leads you down the path of Bernie Sanders.”

“We understand!  We surrender!  Please forgive us.”

Buttigieg forgave them but said they had to serve time for what they did.

The crew is currently in the custody of the New World Order, pending extradition to their home planet.

The Buttigieg campaign said they will donate their UFO ad spaces to the Biden campaign.

Note:  This is a work of fiction. All opinions expressed are my own and may not reflect the views of any organizations I work for or my employer.  Feel free to leave a comment here or in the Bolingbrook Babbler Readers Group.