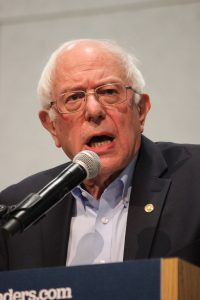 File photo of Sen. Bernie Sanders. “IMG_5513” by cornstalker is licensed under CC BY 2.0

Fresh off his victory in the Nevada caucuses, Presidential candidate Sen. Bernie Sanders hosted the largest political rally in the history of Bolingbrook’s Clow UFO Base.  The rally was broadcasted live across the solar system.

“The solar system is feeling the burn!” said Sanders.

The crowd chanted, “Bernie or Burn!”  Sanders motioned for the crowd to stop that chant.

“Let’s be clear,” said Sanders.  “We’re not going to literally burn people.  We’re going to give people Medicare for All.  We’re going to reallocate government funds to cancel taxpayers’ student loan debt.  The only thing we’re going to burn is the structure of the corrupt New World Order!”

Sanders called on his supporters to vote in the March 1st Democratic Interplanetary Primary.  The primary is for members of the Democratic party who work off-world but within the solar system.

“They say, ‘Oh the Interplanetary Primary is a waste of time.  The delegates selected can’t vote until the fourth round of delegate voting.  Why bother?’  I’ll tell you why, because this contested convention will go to the fourth round.  If we can survive the superdelegates and the backroom deals for the first three rounds, the Interplanetary Delegates will push us over the finish line!”

“I have consistently fought for the working class. When the New World Order refused to make changes, I turned to the Illuminati.  We agreed that the current world order doesn’t work, and must be replaced.  It was a natural fit!”

“I want to thank my good friend Roger for hosting this fine gathering.”

“Don’t mention it,” Claar yelled back.  “Please….I’m on the verge of becoming a recurring Fox News guest.”

“Good point.  Folks.  The Illuminati is made up of both Democrats and Republicans.  Trump is a member of the Illuminati.  If I get the Democratic nomination, the Illuminati will win the Presidency.”

While Trump is a member of the Illuminati, Sanders did not show him mercy:

“He disrupted the world order, but he has no vision besides kleptocracy!  He is an incompetent fool and a useless tool.  He needs to be replaced before he kills us all!”

Sanders warned that the New World Order will fight dirty to steal the nomination from him:

Later in the speech, Marianne Williamson astrally projected herself onto the stage and endorsed Sanders:

After she vanished, Sanders replied, “Thanks, Marianne.  Now, where was I?”

Sanders concluded by saying all are welcome to join his “revolution:”

Note:  This is a work of fiction. All opinions expressed are my own and may not reflect the views of any organizations I work for or my employer.  Feel free to leave a comment here or in the Bolingbrook Babbler Readers Group.