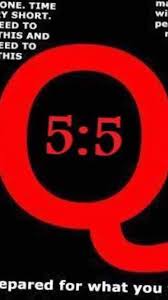 With QAnon standing behind him, Claar announced that to celebrate her promotion to the rank of religious cult leader, he was giving her: a trophy; unlimited drinks for life at Tailgaters; free dining for life at the Bolingbrook Golf Club; and $1000 worth of Ulta products. Claar also announced that he was ordering all of Bolingbrook’s covert agencies to recognize September as QAnon Month.

“She has done more to promote chaos in this country than any other operative,” said Claar.  “When the United States falls and Illinois is dissolved, future Bolingbrook residents will look back at QAnon’s first post as the event that led to their liberation.  Ford!”

After Claar performed the Sacred Glowing Orb Ceremony, QAnon thanked Claar for the honor, and then thanked Jeffrey Epstein for “taking me to the next level.”

QAnon then said, “Some of my followers were having doubts when my predictions weren’t coming true.  But I kept going because I knew that somewhere out there was a billionaire behaving badly.  They all behave badly because no one is going to stop them.  Jeffrey pulled through for me, big time.  Then he killed himself before his trial, which was even better for me.  Now people on the Left and Right are coming up with conspiracy theories to explain his death.  The truth is I had nothing to do with it, but boy am I going to reap the benefits from people who believe I predicted his death.  Honestly, I just believe in the power of human incompetence, and the ingenuity of billionaires who don’t want to face the consequences of their actions. Did you know that 1/3 of prison suicides occur when prisoners are on suicide watch?”

QAnon then looked down at the floor and said: “Hey Jeffrey, if you see my dad down there, tell him to go (expletive deleted) himself!”

QAnon then said while she was honored to be designated as a cult leader, she still has bigger plans:

“I love that video where the woman says: ‘Q is you.  Q is me.’  It makes me happy as can be.  It’s okay to laugh.  Anyway, I want to transform my cult into a major religion.  Some in the Illuminati say it’s impossible.  I say if I can persuade people to believe that Trump and (Robert Mueller) are working together, J.P. Morgan sunk the Titanic, everyone opposed to Trump is a pedophile, and that freedom means supporting a military coup, then I can become the next Jesus, Mohammad, or Buddha!”

After QAnon concluded her speech, Trustee Michael Carpanzano announced that he was selling QAnon products:

“That’s sweet,” replied QAnon.  “So I hope you don’t mind that my next post will say that you’re working with (Trustee Robert Jaskiewicz) to liberate Bolingbrook from Deep State Operatives Jaime Olson and Carol Penning, who are secretly controlling Roger.  Oh, I think I’ll add that Heart Haven Outreach is controlled by (Will County Board Member Jackie Traynere).”

“That doesn’t make any sense!”