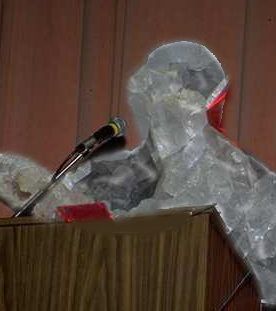 File photo of a resident of Bolingbrook’s sister planet.

“When I first heard that there was a planet with a name similar to Bolingbrook,” said Claar to the interstellar press corps, “It was as if the universe was telling me to make them a sister community to Bolingbrook.”

Claar also told the press that neither tax dollars, nor the village’s covert funds, were used to pay for the trip:  “I used my interstellar campaign fund to pay for this delegation.  There are constituents on this planet that I’d like to meet, and we have other campaign business to conduct…And no, it does not involve abducting residents and brainwashing them into voting for the Bolingbrook First Party!”

Trustee Sheldon Watts, who is running for reelection in 2019, recorded part of a campaign ad on Bogingabook:

“I love STEM and I love Bolingbrook,” said Watts, reading his lines.  “Not only was I mentored by Leroy Brown, but I’m also a nice guy.  I deserve your vote for Trustee in this election, and I am determined to do whatever it takes to make you vote for me.  I might even host a surprise event at your favorite restaurant, or canvass your home.  Whatever it takes to win, I will do, because this nice guy doesn’t believe in finishing last.”

“You are the best silicon-based beings I have ever had the pleasure of reading to,” said Hoogland.  After minutes of cheering, she announced that she was not running for re-election.  “I understand that my true calling in life is to tour the Milky Way and read announcements. I love all of you!”

“We love you too,” replied one audience member.  “In a non-mating way!”

The delegation also visited a reception with the political leaders of Bogingabook.  While leaders and delegation members gave speeches full of pleasantries, there was some tension when Claar introduced himself to the son of Bogingabook’s former ambassador, Conlosi:

“Hello,” Claar said to Conlosi.  “Did you know that your father plagiarized Star Trek when he called my residents ‘ugly bags of water?’”

“It’s not plagiarism if it is a statement of fact,” replied Conlosi.  “Humans are up to 60% water and are undeniably ugly to us.  Besides, did you know that your offspring insulted my father?”

“My daughter didn’t insult your father,” replied Claar.  “She objectively pointed out that your father’s crystal brain was pretty, and I still agree with her.”

“If my father were still alive,” said Conlosi, “He would try to kill you for saying that.  Fortunately for you, my culture underwent a great gender revolution, and we are no longer obsessed with our reproductive appendages.  So I will make you feel better by imitating the sound that you call laughter.”

“Actually,” said Claar.  “I would feel more at ease if I made a small donation to your favorite interstellar charity.”

Claar then transferred credits to the charity.

“Where are your other trustee candidates,” asked Conlosi.

“They’re still getting their security clearances from the Illuminati.  It’s an expensive process, but we’ll work it out in the end.”

“Impressive!  You had a great expense but still donated money to my charity.  I must repay you by making a large donation to your interstellar campaign fund.”

Claar accepted the donation.  Later he spoke with Watts:  “Sheldon, sisters communities are just like real sisters.  Some days they want to kill you.  Other days they love you as if you mean the world to them.”

Just asking questions about Thanksgiving (Fiction) » « Has it really been twenty years? (Non-fiction)