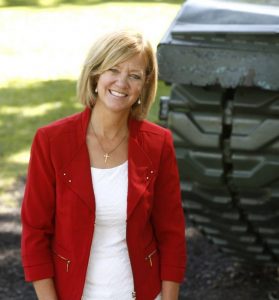 “Your endorsement means so much to me,” said Ives.  “Throughout my career, I have fought the New World Order’s agenda of creating a one-world, secular,  overly tolerant, world government. Just between you and me, their goals have always struck me as queer.”

Ives admitted that she initially had her concerns about the Illuminati. “All my favorite websites treat the Illuminati like it’s an evil organization.  So I thought they were tempting me to Satan’s side.  Now I understand the Illuminati’s ultimate goal is to create global chaos. The liberal media makes ‘chaos’ out to be a scary word.  All it means is tearing down an oppressive government and creating the opportunity for freedom: The freedom to ban abortion.  The freedom to tell gays they can’t get married.  The freedom to keep the suburbs pure; our rural areas devout; and the freedom to quarantine Chicago.”

Ives also defended her controversial ad mocking transgender people for using the bathroom of their choice.  “I will say anything to take down (Governor Bruce Rauner).  Right now I’m behind in the polls.  The Republicans are a conservative party.  Conservatives hate (slur deleted) because they challenge our belief that there are only two genders, and God chooses which one you are.  We hate difference.  We fear change.  If I can tie the governor to something Republicans fear and hate, then I will win the nomination.  Some bleeding hearts say I’m promoting harmful stereotypes, and contributing to a hostile environment against transpeople.  Tough!  I’m going to take this state back to the 1850s, and you can either get on the wagon or get run over!”

As governor, Ives also promised to protect Bolingbrook residents from “creeping Sharia law,” and hoped Mayor Roger Claar would cooperate with her.  Though Claar performed the Illuminati’s glowing orb ceremony before she walked on stage, he left before she started her speech.

A receptionist for Claar denied that an Illuminati event happened at the Bolingbrook Golf Club.  “I loved those books back in the 1970s, but then I grew up and became a wholesome Bolingbrook resident.”

In the background, a man who sounded like Claar yelled, “What do you mean you couldn’t kick him off the ballot?  We can’t have a Nazi representing our party in the Illinois Third Congressional race!  Maybe we can persuade Representative Lipinski to switch sides?  He is a Democrat in name only.”