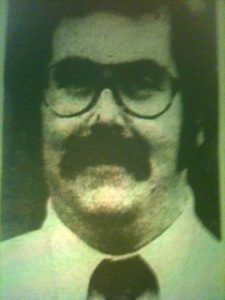 n 1980, America rejected The Carter administration and embraced the pro-American, pro-responsibility policies of Ronald Reagan. It really was morning in America. In 1981, Bolingbrook decided to elect liberal Ed Rosenthal to be the mayor of Bolingbrook.

The residents of Bolingbrook supported his efforts to create transparency inside village hall. They were willing to buck the national trend to put the Pride Party and him in office.

Rosenthal’s election angered Babbler publisher John Olson so much, that he would use the Babbler to try to get Rosenthal recalled before his inauguration. He said that Bolingbrook needed to be saved from that, “Peacenik hippy commie teacher!” the Babbler, under protest from the editor, ran articles about Rosenthal’s “numerous visitors with alien bankers” and attacked his family. When the Babbler questioned his wife’s administration of The Fountaindale Library and its “Collection of cursed books,” Rosenthal wrote a letter to the editor. When the Babbler claimed that his oldest daughter had a collection of voodoo dolls, he submitted a guest opinion.

When the Babbler wrote about his youngest daughter, Rosenthal marched into the Babbler’s new Barber’s Corner office and barged into Olson’s office. The two then had the loudest argument in the history of Bolingbrook. The argument was heard as far away as Downers Grove, and as far underground as Hell. They only calmed down when lawyers for both sides entered the room.

After the meeting, Olson announced that he was stepping down as the publisher of the Babbler. He added that the Babbler would retract its article about Rosenthal’s youngest daughter. To date, this is the only retraction in the Babbler’s history.

Rosenthal then agreed to his first interview with the Babbler as mayor, but stated that he be allowed to “conclude our settlement there.” Our reporter had no idea what he was getting into.

Mayor Rosie speaks to the Babbler!

Rosenthal: Oh come in. You can call me Mayor. We’ll worry about calling me Ed or Rosie later once you’ve earned it.

Rosenthal: You must be the bravest reporter at the Babbler.

Reporter: I drew the short straw.

Rosenthal: Ah. Well, have a seat. This won’t hurt much.

Reporter: OK. Um, you seem calmer now compared to the last time I saw you.

Rosenthal: Oh I’m quite calm now. In fact, I’ve never been happier. I heard that you have a new publisher now.

Reporter: Yes. Chris Olson took over today. He says that he’s going to keep the editorial and business departments separate at the Babbler.

Rosenthal: I think that’s good. All I have to say to your staff is this. You can accuse me of visiting alien bankers, though I only go to the bank to cash a check. You can say my wife is hoarding spell books, though she really supports science. You can talk about Rachel because she thinks it cool to have voodoo dolls. But when you go after my youngest daughter, that makes me mad. She’s too young for your silliness.

Reporter: I’m here to assure you that my report won’t be silly.

Rosenthal: If you say so. Now, what’s your first question? And it better not be about cabals ,or secret business groups, or any other innuendo.

Reporter: Um. Just a second. Oh. Trustee Claar says your policies will stunt Bolingbrook’s growth. How do you respond?

Rosenthal: Ah a sensible question. Well, we can’t keep growing forever. If our growth does slow down, we can use this as an opportunity to build up our infrastructure. I’m sure some residents would like to have sidewalks.

Reporter: Except for the Cars First party.

Rosenthal: Let’s not talk about them.

Reporter: Some people close to Claar say that he feels Bolingbrook needs to keep growing in order to cover up Clow UFO Base. How do you respond?

Reporter: That makes sense. Plus, it’s a great way to bring alien products to the public by saying they were manufactured in Bolingbrook.

Reporter: Aren’t you worried that by bringing in industry, you’ll endanger the local farmers?

Rosenthal: Oh no. They can go together.

Reporter: Our sources say that Trustee Claar is concerned about the “shopping gap” that’s driving residents out of town to buy basic needs.

Rosenthal: Roger is a good friend, but I think he’s too obsessed with shopping. The future isn’t in strip malls but in independence.

Rosenthal: Remember when gasoline was $1 a gallon.

Reporter: How could I forget? That’s why I voted for Ronald Reagan: So he could lower gas prices, cut my taxes, and increase defense spending -while cutting the budget to lower the deficit.

Rosenthal: (Chuckles) Reagan might be able to lower gas prices for a while, but eventually prices would go up. You know someday, gasoline could cost as much as $3 a gallon.

Rosenthal: Exactly. When gas gets that high, Chicago’s leaders are going to start asking questions. Like why are we buying our corn from Iowa when we could be buying it from Bolingbrook at a better price?

Rosenthal: So, our farmers will make lots of money feeding Chicago. Then they’ll want to buy things with their riches. By having most of our manufacturing in Bolingbrook, we’ll keep the money in Bolingbrook. The farmers will get good deals because they don’t have to import their goods from out of state. The non-farmers will have good paying factory jobs, and the village will have a strong tax base. Now isn’t that a better investment than strip malls?

Reporter: Our sources are telling us that the village has been receiving messages from a thousand years into the future. Do you have any comment?

Rosenthal: No, but I’d be happy to listen to what they have to say.

Reporter: What if they’re hostile invaders?

Rosenthal: Then we’ll defend ourselves as best as we can from invaders from a thousand years in the future.

Reporter: But that’s not what I expected from you.

Rosenthal: I am a liberal, not a hippy.

Rosenthal: We’ll have to wait a bit. I think the last part of our agreement is about to arrive.

(Rachel and her younger sister arrive.)

Rosenthal: That’s what younger sisters are supposed to do. (Name withheld), come here.

(Youngest daughter shyly walks over to her dad.)

Rosenthal: (Points to the reporter) Do you see that man over there? That man works for the Babbler. They wrote that mean article about you. Now show daddy what you told mommy you were going to do.

(She walks up to reporter and stares at him for a few seconds.)

Youngest Daughter: I AM NOT AN ADOPTED SPACE ALIEN!

(Kicks the reporter in the shins. Both daughters run away.)

Reporter: That hurt. Are you going to punisher her?

Rosenthal: I’ll get around to it eventually. Right now, I’m savoring the moment.

In 1984, Rosenthal led Bolingbrook to victory in what would later be known as The Bolingbrook Time War. His bold leadership in the face of a technologically superior foe saved Bolingbrook from certain destruction. In the 31st century, he is hailed as a great liberator.

Though he was driven from office when he tried to disguise the cost of an anti-UFO defense system as wallpaper for his office bathroom, Rosenthal is still a respected resident of Bolingbrook. It is as if the residents know that Bolingbrook owes its continued existence to him.

Tomorrow:  Every journey starts with a first step.  Mayor Roger Claar invites the Babbler to watch him take his first steps towards becoming the longest-serving mayor in Bolingbrook’s history.