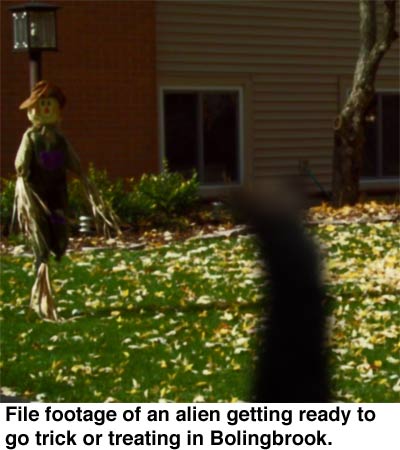 For the first time since 1988, space aliens have been barred from trick or treating in Bolingbrook.

“Melania Trump, who is the director of the United States Office of UFO Base Operations, issued a new set of directives,” read the press release from Clow UFO Base.  “Based on these directives, we have decided not to allow trick or treating by our visitors.”

Sources within Clow UFO Base provided copies of Melania’s directives.  While the documents do not directly specify Trick or Treating, they do stress that UFO Bases under Illuminati control must not “allow aliens to take ‘anything of value’ from resident humans without filling out impact statements.”

“It’s just too much bureaucracy,”  said an anonymous Clow official.  “Since it’s essentially aliens taking candy away from Bolingbrook’s children, we decided not to bother.  Think of it as (Bolingbrook Mayor Roger Claar) putting Bolingbrook’s kids first.”

Plojakwil, a resident of Kepler-62f, said she was disappointed in the ruling.

“I spend months crammed inside Clow UFO base for my job.  They just canceled the one time of year I get to go outside without a costume.  Thanks, Roger.”

Javekodosh, a scientist for the Interstellar Commonwealth, says the ban will hurt interstellar research:

“We can observe from a distance, we can insert probes, and we can consume your media.  Nothing, however, takes the place of face to face interactions with humans.  Some our best sociology studies of humans involved trick or treating.  This decision will hurt science in Bolingbrook.”

Javekodosh also questioned the rationale for the ban:

“If there are more trick or treaters, it means residents will have to buy more candy.  Increasing candy sales will help local businesses. More residents may consider handing out candy.  That means more candy for Bolingbrook’s children.”

Plojakwil says she plans on trick or treating in Rochelle instead:

“I’m taking my business to Hub 35 and the New World Order.  They allow us to trick or treat and the staff there are nicer.  If Roger doesn’t stand up to the Trumps, Clow will lose money.”

When reached for comment, a receptionist for Claar said: “Trick or Treating this year is allowed on October 31st from 4 PM to 7 PM.  Make sure you accompany your children or have a responsible teen to keep an eye on them.”

In the background, a woman who sounded like the unofficial advisor Charline Spencer said: “Senators Bob Corker and Jeff Flake have scored political points by distancing themselves from Trump.  You could—“

Bolingbrook Deputy Mayor Leroy Brown dies (Non-fiction) » « Are you an atheist who used to believe in God? Take this survey! (Out of character)