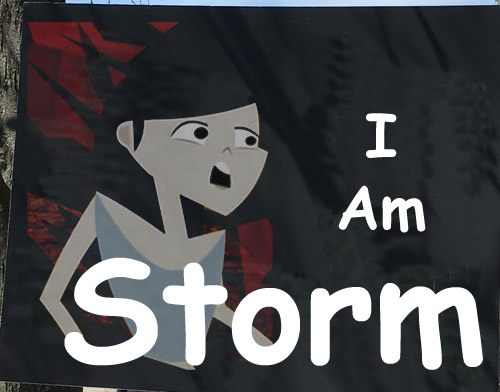 A Placebo marcher holds up an “I am Storm” sign. The imagery is from the “Storm” online short film.

“Science teaches us that ghosts aren’t real, we inherit traits from our family members, and CO2 is bad,” said Patrick Z. Williams, march organizer.  “Well, if I descended from my cousin, why is my cousin still around?”

Many of the marchers said they supported President Donald Trump’s proposed cuts to scientific and medical research.  While critics of the cuts say they will harm innovation and stifle scientific research, the marchers pointed to Cook County.

Janet X Carlson said: “Ever since the University of Chicago was founded, crime, atheism, political corruption, alcoholism, and loud music have skyrocketed in Cook County. It is no coincidence that the two science marches in Chicagoland took place in Cook County.  Science is crooked!”

Peter, who asked that we not use his last name, added: “Donald Trump is great without science!  Getting rid of science will make America great again — no matter what Bill Nye says!”

Though the march was not political, some members wanted the village to grant more business licenses to homeopathic and naturopathic practitioners.  Some also called for Bolingbrook to ban “unsafe” vaccines.

Janet explained: “If the mayor, or whoever is in charge, doesn’t act fast, all of Bolingbrook’s residents will be autistic within ten years!”

Williams, using a dangling crystal as a guide, started the march at the Fountaindale Public Library. He seemed to lead the marchers in random directions.  Several minutes later, Williams lead the march across the street to Village Hall.  The marchers made their way to a car parked in a no parking fire zone.

There Williams stated: “We must be radiating positive energy. The mayor is here!”  After marching around the building and chanting, they arrived outside Mayor Roger Claar’s office patio.  After a few more chants, Claar stepped outside and addressed them.

“You know, just because you have the right to protest doesn’t mean you should.  You guys are giving me a headache!  And don’t even think about running for office.  I had to spend over $200,000 on the last campaign!  That’s money that could have gone towards scholarships, church donations, new cars, and trips to meet constituents around the world!  Now go home before I call my police department!”

At first, the marchers seemed demoralized.  Then Williams addressed them:

“I just played back what he said with my reverse speech app.  He really likes us!”

The marchers then started chanting “Roger” and “Science sucks.”  Five minutes later, a police officer asked them to leave.

“This was a very successful march,” said Williams.  “We didn’t have the numbers that the March for Science did, but we met the mayor, so that means our march was more potent! “  He added: “Honestly, what has science done for Bolingbrook?  Aside from Adventist Hospital, the Internet, and Whalon Lake?  Well, there is material science that allows WeatherTech to make great floor covers, but the CEO supports Trump, so I guess it’s OK.”