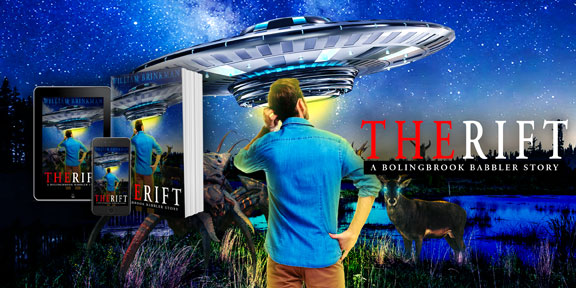 The Rift: A Bolingbrook Babbler Story releases on July 13, 2022.

Here’s a short excerpt from The Rift: A Bolingbrook Babbler Story:

“Let’s talk about the stable boy and the rock,” said Michelle, sitting down with Tom on the couch. “As I recall, there was a little boy who was brought to a dragon’s lair.”

“Dogma the dragon.” Tom pointed to the dragon in the picture, who sat atop a pile of rulebooks.

“Until the knight of truth appeared and chased Dogma away.”

Michelle nodded, picking up another of Tom’s drawings, which showed a knight holding a glowing sword. “You drew that very well.”

“So the knight told the boy there was no water in the rock, and the boy rued his foolishness.”

Jason sat down with them. “Neither did the boy. He vowed to slay all the dragons of deception and asked the knight of truth to teach him how to vanquish them. The knight took him under his wing. The boy studied and trained for a long time, till one day he became a knight of truth himself, and he was never fooled again.”

Jason stood up and inserted the disc into the DVD player, then joined Michelle and Tom back on the couch. He placed an arm around Tom’s shoulders and pressed play. On-screen, a magician with thick, professionally styled hair and a neatly trimmed snowy white beard appeared behind a desk.

“You know what the best part is?”

You can preorder the eBook for $.99 at Amazon and other retailers. Otherwise, the release date is July 13, 2022.