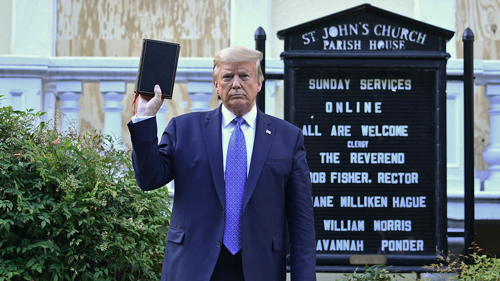 A picture says a thousand words. Our country is literally burning from our unchecked legacy of racism. A hundred thousand of our fellow citizens are dead from a pandemic that the White House first denied, then downplayed, and continues to make unscientific claims about, in the hope it will all just miraculously disappear.

And with all this swirling around him, the President felt it necessary to deploy the National Guard to clear the DC streets (escalating the violence to do so), so that he can — what? talk about the pain people are in? offer words of hope or solace to a grieving nation? no — HOLD UP A BIBLE. IN FRONT OF A CHURCH.

If this doesn’t demonstrate how far around the bend this country is on issues of church-state separation, nothing will. To equate upholding religion with a “law and order” posture is truly disgraceful, particularly when that posture includes the ongoing race-baiting this administration has engaged in its entire term (most recently quoting an anti-desegregationist, “when the looting starts, the shooting starts”).

And to try to pit so-called “good Christians” on one side of law-and-order issues is demonstrably false, as attested to by the words of Mariann Edgar Budde, the bishop of the Episcopal Diocese of Washington who oversees that very church!

Bishop Budde said: “The President just used a Bible and one of the churches of my diocese as a backdrop for a message antithetical to the teachings of Jesus and everything that our church stands for. To do so, he sanctioned the use of tear gas by police officers in riot gear to clear the church yard. I am outraged.”

We too are outraged, and horrified at the abdication of leadership we’re watching unfold in real-time. We reject the ugly, blatant expropriation of religion to justify the policies (or lack of policies) that have led America to its darkest hour in at least a generation.

We once had a president who proudly declared “The Buck Stops Here” when taking responsibility for what’s happening in our country. Look at where we are today, Mr. President. We long for the days when only you claimed to experience “American Carnage.” Now, we really have it, and you helped bring it about. The buck stops with you. And the best you can do is a photo-op with a book you haven’t even read, as a dog-whistle to your dwindling Evangelical base?! “Sad,” indeed.

Nevertheless, we believe this too will be overcome. The causes driving Americans into the streets are the right causes: racial equality and justice. As we have said before, Christian supremacy is *white* Christian supremacy, there is no daylight between the two, and all these issues are intertwined. Therefore, Jews for a Secular Democracy will continue to support anti-racism efforts and join our voices with those who are outraged to see the president HIDING BEHIND A BIBLE rather than engaging in the real work needed of immediate deescalation, long-term police reform, and the dismantling of institutionalized racism in this country.