The Village of Bolingbrook denies it is using wereskunks to replace furloughed village employees: 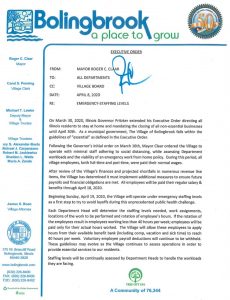 “There’s no such thing as wereskunks,” said Village Clerk Carol Penning.  “Now if you’ll excuse me, I have to find the paperwork that proves (Mayor Roger Claar) can furlough any union employee he wants!  Why can’t people trust Roger instead of filing silly grievances?”

Despite the denials, some residents still claim that the village is employing wereskunk as temporary workers.

Dominique, a village employee who asked that we not use her real name, claims a wereskunk is covering her job:

“I was walking past Carol’s office and heard growling and things being tossed.  Then I heard Carol say: ‘Wrock, I’m giving you a choice: You can tear up that small pile of papers, or you can file them, and I will give you twice as much paper to devour.’  I know she was talking to a wereskunk.  Roger said he was reducing the staff to emergency levels, and then he hires wereskunk to replace us.”

Stephanie, a resident who did not provide her last name, claims a wereskunk employed by the village visited her:

“He was so rude!  First, he nearly scared me to death by approaching my home in his monstrous form.  Then he knocked on my door so hard that he nearly destroyed it.  He warned me not to let the storm drain get clogged, or he would flush my home down it.  I pointed a gun at him and told him he should leave.  He said it was against the law to harm a village employee.  Then he devoured my trash bags and tossed garbage all over my front yard.”

Stephanie added that she complained to Claar about the incident:

“Roger said he would look into it.  He also kept dropping references to his political “foes” and how well funded they are.  I told him I couldn’t afford to donate to his campaign fund, and he said not to worry because he would eventually talk to the employee.  I hate our Roger tax!”

“We have saved up enough money to hire a new Building Commissioner.  Yes, there’s a hiring freeze, but Roger needs to make exceptions sometimes.  We just need employees who we can pay with garbage instead of cash.  You don’t want the board to pass another tax increase, do you?”

The person insisted that the furloughed employees would be brought back by no later than Phase 5 of Illinois’ reopening plan.

“Like Roger told me:  When life gives you a Coronavirus, make Corona beer.  I’m not going to argue with him.”

When reached for comment, a receptionist said Claar was busy and could not be disturbed:

“I’m thankful to still have a job serving the wonderful residents of Bolingbrook.”

In the background, Drake’s “Nonstop” played.

A man who sounded like Claar said:  “Charlene, did Bill Mayer really make this deep fake video?  My eye color is all wrong!”

Charlene replied: “No.  Officially, it was authorized by the Bob Bailey Project.”

“They claim to be former supporters who now want you removed from office.”

“Yep.  Don’t count on having the largest campaign fund if you decide to run for reelection next year.”