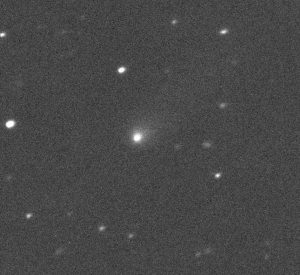 Image of an interstellar cruise ship disguised as a comet.

Clow UFO Base officials confirmed that they received infected passengers from a cruise ship, known to the public as interstellar comet C/2019 Q4 (Borisov).

“We have taken all necessary precautions,” said Bolingbrook Mayor Roger Claar.  “Clow has one of the best medical facilities on Earth for treating visitors.  There is no danger to our residents or to humanity at large. Anyone who says differently is a foe and shouldn’t be trusted.”

C/2019 Q4 is a sub-light speed luxury cruise ship which has been traveling towards Earth for thousands of years.  According to Clow officials, the craft sent out a distress signal last month stating that half the passengers and crew were infected by an unknown illness.  After a medical team from the Interstellar Commonwealth visited the craft, they ordered most of the infected passengers removed from the craft.  Clow UFO Base was one of the sites chosen by the Illuminati to treat passengers.

Dr. Rachel X. Zimmerman, Director of Clow’s Infectious Disease Division, said many precautions were taken to reduce the risk of contamination:  “We have a special landing bay with a hospital for situations like this.  It has its own life support system.  We’re following strict quarantine procedures.  Our medical staff won’t leave until these patients are cured or incinerated!”

Qugodlak, a doctor from Barnard’s Star, said that cruise ships like C/2019 can become breeding grounds for infectious diseases:  “These ships may travel for thousands of Earth years before they can dock.  That means they’re never properly cleaned or repaired for most of their journey.  On Earth, a broken ice machine leads to food poisoning.  On one of these ships, they can create an ecosystem of death.  That why I tell my patients to never take a trip on one of these ships.”

Blousk, Head Thinker of Evolution Cruise Lines, thanked Claar for his help and defended his business:  “All of our passengers are practically immortal.  Who wants to live forever?  Those who die will die among the stars.  Those who survive will have loving memories of the evolution of humanity— As well as memories of our fine dining, and centuries of playing Gobabble Ball.”

Qugodlak said the healthy crew and passengers will be taken on a guided tour of Earth.  The ship will be depressurized and exposed to the Sun’s radiation in hopes of sterilizing it.  Once the ship is disinfected, the ship will be re-pressurized, and the remaining passengers and crew will be allowed back on board.

A receptionist for Claar said he was out of the office and had no interest in commenting.

In the background, a man who sounded like Trustee Michael Carpanzano said:  “We need to tell the whole world that Bolingbrook was chosen by Money Magazine as one of the best places to live in America this year.  Why are you shaking your head?”

A woman who sounded like Covert Social Media Operative Charlene Spencer replied: “First of all, being number 85 isn’t great.”

“Being 85 out of all the communities in the country is great!”

“Second of all, if you link to the article, people will discover that Naperville is ranked number 45.  They’ll realize that they can move to Naperville, save money, have a nearby Metra station, and be close enough to Bolingbrook to exploit all the things that make it great.”

“You’re so negative.  Why can’t you be positive, like every other Bolingbrook resident.”