A man who claims to be Bolingbrook’s only billionaire announced his plans to support the Bolingbrook First Party in the April 2 Village Trustee election. 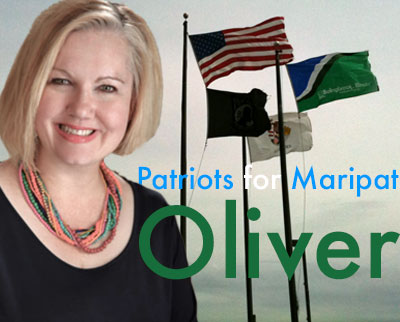 This graphic could soon be featured on the Patriots for Maripat Oliver website.

“There’s a lot of work to be done, and it just would be faster if I did it on my own.  Maripat has done a great job getting to people on the ground with flyers and her Facebook page is fine.  However, she still needs help from an organization right now as her party is in disarray.  Only a person of means, like me, can do what needs to be done.”

Zinn unveiled designs for the websites for his Super PACS: “Citizens United to put Bolingbrook First,” “First Voters for Bolingbrook,” and “Patriots for Maripat.”  He said that together with Oliver’s website, residents will know that Bolingbrook First believes in fighting for residents, higher wage jobs, low taxes, more growth, fiscal responsibility, and garbage can reform.

Zinn also premiered two tv ads that he hopes to get on the air by late March.  The first ad starts with a montage of all the trustee candidates:

Voiceover:  Of all the people running for Bolingbrook Trustee, only one has stood up to the Edgar County activists attacking our village.

Video of a police officer approaching a man speaking at a DuPage Township meeting.  The man will not stop talking.

Oliver: He has gone way over time, and he’s being very disrespectful.

The man is removed from the meeting.  Dissolve to a video of a waving Bolingbrook Flag and an image of Oliver.

Voiceover: Any party can brag about being first.

Dissolve to the Bolingbrook First logo.

The second ad starts with an older woman in her living room.

Woman:  I’ve lived in Bolingbrook for many years. I’ve seen many elections and spoken to many candidates.  This year, I’m voting for a party that knows Bolingbrook almost as well as I do.

Woman:  Who is that?

She opens the front door.  A younger female candidate speaks.

Candidate1:  Hi.  I’m with the First Party for Bolingbrook—

Woman:  Bob Bailey was one of Bolingbrook’s founding fathers.  He served as mayor and would have served a second term if the Federal Government hadn’t driven him out of town.  Are you saying he wasn’t for Bolingbrook?

Woman:  Bob meant business.  You mean nothing to me.

Candidate1:  Oh yeah?  Well, I bet I have more homestead exemptions than you do!

Anyway, I’m voting for the only party that really cares about Bolingbrook.

She opens the door and sees another candidate at the door.

Candidate2:  I’m running for Village Trustee because I care.

Woman:  I know you.  You’re the trustee who didn’t care when wrong information was printed in the Village Directory.  If you didn’t care about that, why should I expect you to care about important issues like our debt or our overpriced water?

Woman:  The party I’m endorsing cares about real people and has a history of—

She opens the door and sees another candidate.

Candidate3:  I’m running for Village Trustee.  People describe me as—

Woman:  What are you, a walking resume statement?  No real person talks like that.

She slams the door on Candidate3.

Dissolve to the logo.

Woman:  Because any party can say they’re first.  Only one party puts Bolingbrook First.

While Zinn says he hopes to make the race exciting, he added that he does have an issue with Claar: “When I heard about a bank closing a branch, I sent an application to the Planning Commission so I could use the space to open a restaurant that serves caviar tacos.  Roger called me and said that because I didn’t ask for his permission, he was going to deny my application.  Now there’s a hole in the ground where my restaurant could have been.”

All of Bolingbrook’s parties spokespersons refused to be interviewed for this story.