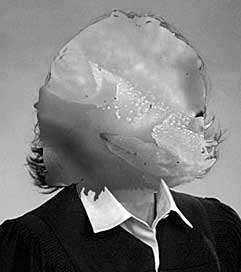 “Instead of wasting this court’s time with frivolous lawsuits,” stated Judge Kilos Surgon in her decision. “He should just stick to lecturing about his questionable hypotheses, and keeping his appendages to himself.”

The lawsuit stemmed from an investigation of an incident in February at a skeptical symposium at Clow UFO Base.  A disciplinary board, lead by Claar, found Shermer guilty of inappropriately touching an alien on stage during a panel.  The ruling was then reported by the Escape Velocity Blog Network, an interstellar organization that distributes “electronic social justice content from non-interstellar civilizations.”

Shermer’s lawyer, Charles X. Smith, argued that the conviction was flawed, and caused irreparable harm to Shermer.  He explained that the sentence of Shermer relied on eyewitness testimony, which he claimed is always unreliable.  “No one can remember all of the details of everything in their lives. Therefore eyewitness testimony should never be allowed in any court.”

Smith also argued that video evidence of the event shouldn’t have been considered.  “Video evidence can be faked.  Look at all the UFO videos on YouTube.  Unless you can prove with 100% certainty that the video wasn’t faked, it shouldn’t be allowed.”

Smith also noted that Escape Velocity distributes material from Freethought Blogs and The Orbit.  “They value distributing material that makes my client look bad.  My client simply wants to be compensated.  He is the supplier.  They are the consumer.  This court should respect the capitalistic market and give my client money.”

The defense lawyer, Joan Z. Parker replied that Claar’s investigation was proper.  “Eyewitnesses were interviewed in a way that reduced the risk of contamination of their testimony. Also, the witnesses were discussing someone they were very familiar with.  The videos were examined and were not tampered with.  Michael only received a warning for his actions and will be escorted during future visits to Clow.  He is also still a member in good standing of the Illuminati, and The Skeptics Society is still the official skeptical organization for the Illuminati.  I should also note that people still cite his article on the lifespan of civilizations — even though he is not an anthropologist. In short, if this court allows this lawsuit to proceed, then every human believer in UFOs and the paranormal should be allowed to sue Michael for damages done to their reputations!”

The judge dismissed the case with prejudice, and Smith said Shermer would not appeal.  “We really thought we had a good case and could overcome Clow’s army of professional lawyers.  We know better now.  At least Michael didn’t have to pay for my services.”

A receptionist for Claar said he was in an important meeting with the mayor of Naperville and could not be disturbed.

In the background, a man who sounded like Claar said, “I don’t care what your press releases said.  Your incinerator is sending smoke into my village and annoying my residents!  I can respect that you fooled the EPA into approving it, but I won’t tolerate you offending the noses of my voters!”

A man who sounded like Naperville Mayor Steve Chirico laughed.  “We’re Naperville.  We have a reputation to uphold.  Taking directions from Bolingbrook politicians is not part of that reputation.”

“I too have a reputation, and taking ‘no’ for an answer is not part of it!”