Sources with friends who may work at the White House say President Donald Trump may have revealed the Bolingbrook Golf Club’ “self-destruct code” to the Russians. 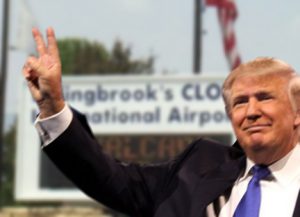 During a meeting with a Russian delegation, Trump bragged about his memory.  The sources say he remembered meeting with Bolingbrook Mayor Roger Claar at the Golf Club.  Trump said he saw Claar enter a code on a keypad built into his desk.  A hidden safe opened up.  Inside were bottles of Trump Vodka, and bottles of Trump Ice.  Smiling at his guests, Trump then recited what he thought was the code.

According to sources, Trump misremembered the code, and accidentally gave the Russian the “self-destruct code” for the Golf Club.  Some of the sources saw a member of the Tass News Agency write down the code.

“Roger almost lost an election because he supported Trump,” said one of the sources.  “This is how Trump thanked him?”

Lenny, a village employee who asked that we not use his last name, confirmed the existence of the self-destruct device. According to Lenny, it was originally intended to prevent the club from falling into hands of a “hostile governmental unit or opposition party.”  The device, when activated, will release a noxious, but harmless, chemical into the clubhouse, rendering it unfit for occupation.  It will also disperse radioactive pellets across the golf course, turning it into a radiation hazard.

“I told Roger it was a bad idea,” said Lenny.  “The device could malfunction, or be used by his enemies.  But he insisted on having it because he was afraid the Cook County Democrats would try to steal the club from him.  I couldn’t persuade him that he was wrong, and now here we are.”

Another source within Village Hall, who asked to be called Chris, claims she received a written note intended from Claar while manning the front desk:  “He had a real thick accent and said Roger would ‘understand the message’.”

After delivering the message to Claar, Claar told Chris to call Vladimir Putin for him.  When she said she didn’t have his number, he replied:  “Google it!  That’s why we spend so much money on an Internet connection.  You didn’t think it was so you could read the Babbler while pretending to work?”

According to Lenny, everything worked out.  Putin promised not to destroy the Golf Club.  Golf Cub staff disarmed the device and expected to have it removed before Trustee-elect Robert Jaskiewicz is sworn in.

“If he ever finds out about this, we’ll never hear him stop complaining.”

Public relations intern Charline Z. Spencer did not completely deny the existence of the device:  “There is no nuclear bomb inside the Bolingbrook Golf Club, and there are no napalm canisters under each golf hole.  The story, as you described it, is not accurate.  These statements are fun to say!”

In the background, a man who sounded like Claar said:  “Of course I’m with you until the bloody end.  Let’s hope it doesn’t come to that.  Still, you might want to meet some civics teachers I—Don’t you ever talk to me like that!  You may be the President of the United States, but I’m the Mayor of Bolingbrook!”

Bolingbrook man debunks skepticism (Fiction) » « From the Webmaster: Around FTB 5/17/16