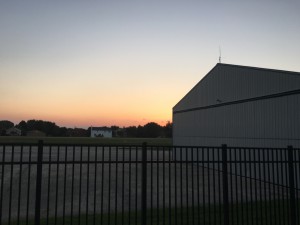 Clow International Airport, which serves as a cover for Clow UFO Base.

First Lady Melania Trump evicted Skepchick and the Center for Inquiry from all Illuminati controlled UFO bases, including Bolingbrook’s Clow UFO Base.  Both organizations have represented the skeptical movement to the greater interstellar community since 2013.

Melania made the announcement during a hastily put together video conference.  “UFO sightings have skyrocketed since we made this unholy pact with both groups!  Flying Saucer, Cigar and Sphere sightings are rising!  It is obvious that both factions of the skeptical movement are more interested in serving their New World Order masters than in covering up UFOs!”

She then gave both organizations four hours to evacuate their consulates.

Paula X. Kelly, acting Skepchick ambassador at Clow, was shocked.  “I thought Rebecca (Watson) was pulling a prank on us.  We’re not responsible for sightings.  We’re responsible for creating cover stories after the sightings.  So I sent Rebecca a text.  She replied with a video chat.  She told me it was real, then gave me the authorization codes to start Operation Bad Puppy.”

The staff then quickly, but orderly, started removing portable hard drives and shredding all documents.  They then drenched the entire interior of the consulate with cat urine.

“I always wondered why we kept gallons of cat urine on site,” said an anonymous staffer.

Once the building was evacuated, Kelly and Watson then detonated firebombs, incinerating anything left in the building.

“I hated to do that, but we couldn’t risk any sensitive information falling into the hands of the Illuminati and their Neo-Nazi allies.”

Joan Y. McNeil, CFI’s ambassador based at Clow, thought the announcement didn’t apply to CFI.  “Yeah we’re technically part of the New World Order.  We also have diplomatic immunity, and we’re with Richard Dawkins!  I thought we were too important to be evicted.”

“She chewed me out when I laughed at her.  She said it was a real order, and Richard couldn’t stop them.  I didn’t think it was possible.  We agree on so many things with the Illuminati!  Why should we be kicked out over a one percent difference?”

The staff, now panicking, started smashing their computers, and setting bonfires to destroy their papers.

“We never planned for this.  This isn’t a third world country!  This is America.  This is where we bring secular activists whose lives are in danger.  Maybe we’ll need to be rescued next?”

During the initial chaos, McNeil reached around the movement’s “deep rifts” for help.

“The staff of the Orbit were so helpful!  They taught us how to wipe our hard drives so even aliens couldn’t access them.  I also learned a Freethought Blogs writer how to overload our fusion reactor without blowing up the Chicago area.”

The staff of both embassies have relocated to Hub 35 UFO Base, a New World Order affiliated base located in Rochelle, IL.

Many staff members wished for the conflict between the Illuminati and the New World Order to end.

“They don’t have to work together, but they could at least stop trying to destroy each other.  Humanity loses when they fight,” said an anonymous staffer.

Sources close to Mrs. Trump say she will announce the formation of a new Illuminati aligned skeptical organization by mid-April.