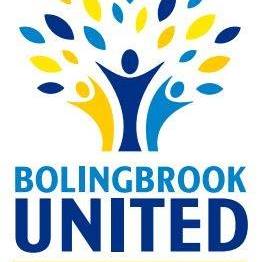 The logo of the now disbanded Bolingbrook United Party.

In its final act, the Bolingbrook United Party closed its office at Clow UFO. Bolingbrook United’s final statement to the interstellar media praised their volunteers and apologized to their fans across the galaxy. Part of the statement read: “When we united against Trump-loving dictator (former Mayor Roger Claar), we started a new chapter in Bolingbrook’s history. Now we must end our chapter, and others must write the next chapter.”

Staffers found out about the closing when former Village Trustee candidate Jose Quintero addressed the staff in person. “I have bad news and good news,” he said. “The bad news is our merger talks with Bolingbrook Independent Voices broke down. The good news is that I will be one of the First Party for Bolingbrook’s trustee candidates. Who’s joining me?”

An unidentified staffer kicked her wastebasket, then started crying as she dropped to the floor. “You sold out to Roger and betrayed (Will County Board Member Jackie Traynere)!”

Quintero denied he was selling out by running with Claar’s former political party. He insisted the party had changed since Claar resigned. As proof, he said in the last quarter, Mayor Mary Alexander-Basta donated more money to the First Party than Claar. He added, “Look at Bolingbrook today. Roger is no longer the mayor. We have garbage toters. Bolingbrook now has two village managers. We’re going to have a cannabis dispensary, and Bolingbrook Commons is getting a long overdue makeover. Think about it. Most of our candidates lost, but, in the end, we got what we wanted!” Quintero later added, “At this rate, Jackie will be on the First Party ticket in 2025, and all those Facebook trolls will suddenly love her.”

A representative from BIV arrived and offered job interviews for positions at their interstellar consulate. All but one former staffer, Joel, accepted the interview offer.

Joel, who asked not to have his last name published, said he wanted to help Quintero reform the First Party. “I did as much as I could as a member of Bolingbrook United. Now that I’m a member of the First Party, I’ll work hard to make it a pro-democracy and anti-fascist political party. I dream of the day Trump demands Roger denounce the First Party because it’s too woke.”

Patricia Z. Baker says she hopes she’s hired by BIV: “If (Trustee Sheldon Watts) won’t join the First Party, neither will I. Besides, BIV is cooler abbreviation than FPB. Doesn’t FPB sound like someone spitting?”

Traynere denied ordering the closure of the Bolingbrook United office. She added she would help the staffers get new jobs, and that it was time for her to move forward. “As the administrator of the DuPage Township, I’m proud that the Edgar County Watchdogs haven’t posted about us for over a year.”

A receptionist for Alexander-Basta said she was out of town.

In the background, a man who sounded like Watts said, “Oh no. Let me do the talking.”

“Charlene, this is Matthew, my fellow running mate for village trustee.”

“Hi, I have a book!” said the man who sounded like Dr. Matthew Glowiak.

“Where’s the other candidate? There are three trustee seats up for election next year. Surely, you recruited a third trustee candidate. Right?”

“I only need one running mate.”

“Dude! That means you’re guaranteeing the First Party a four seat majority on the board, and that’s assuming both of you win. Did you even ask Inez, Meraj, Patti, or Faith to run this year?”

“None of your business. Besides, I don’t believe in power games. I believing in working together to serve Bolingbrook.”

“Dream on, Sheldon. If you win reelection, you’re going to get Jaskiewiczed.”

“Don’t take Bob’s name in vain. Besides, why don’t you do something positive for a change?”

“I am, but it’s taking a while. You don’t realize how many strings I’m pulling just to get Bel Biv DeVoe to consider performing at your first campaign event?”

“Yeah! I’ve even asked them to change the lyrics to Poison, so it’s about Mayor Mary—”

“Excuse me,” said the man who sounded like Glowiak. “Why are you letting her work for us?”

“Because it’s better than having her work against us.”

Trump to have dinner with Satan at the Bolingbrook Golf Club
Clow security arrest alien crew for flying too close to Artemis I
Pathways to Bolingbrook and The Rift books are Amazon’s highest ranked books featuring Bolingbrook.
God to smite Bolingbrook on 12/2/22

I am also the author of The Bolingbrook Babbler Stories. For book updates and a free ebook, sign up for my newsletter. Pathways to Bolingbrook, and The Rift are available at Amazon and elsewhere. You can support my work by buying one of my books.