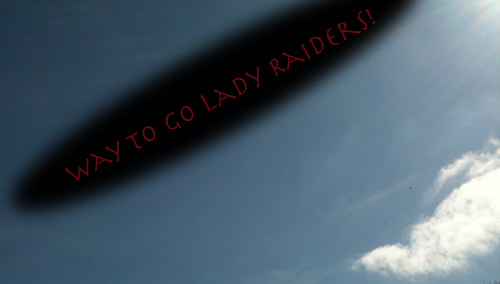 Despite an executive order from Donald Trump, the Village of Bolingbrook has chosen to spare Clow UFO base from destruction.

“We’re sorry the President lost,” said Donna K. Smith, spokesperson for Bolingbrook’s Department of Interstellar Affairs.  “But our pity does not give Trump the authority to order the destruction of Clow UFO Base.”

Smith continued: “(Former Mayor Roger Claar) placing Clow under DOP is yet another example of his genius, and why residents should continue to listen to him.”

As reported by video recordings transmitted from Clow, Trump summoned the crew of Clow and the Village Board for a video meeting.  Trump announced that he had fired First Lady Melania Trump as the head of US UFO Base Operations.  Trump said he was very disappointed in Bolingbrook:

“I asked nicely, ‘Please move your Golf Club.’  Roger said no.  I asked again.  Whatshername said she would get back to me.  She never did.  Then your residents voted against me.  Yes, I’m mad, but I’m a reasonable person.  So your Golf Club can stay put, but your base has to go!”

“You tainted Roger’s legacy. COVID-19 is running rampant in Bolingbrook because of your incompetence!  Residents are unemployed because you won’t deal with the virus.  You’re trampling on democracy by refusing to concede.  Now you want to destroy Bolingbrook’s interstellar economy because you’re mad!  Well, I’m mad at you.  Mad at the Cook County Democrats, and mad at Roger!  On behalf of the independent voices of Bolingbrook, I’m saying no.  No to you, no to (Illinois House Speaker Michael Madigan), and no to (Will County Board member Jackie Traynere)!”

Alexander-Basta walked back in and said: “Nice speech Sheldon, but let’s hear from someone who matters.”

Co-Administrator Ken Teppel walked into the room and announced: “We’re not destroying Clow UFO Base because President-Elect Biden just overruled you.”

“Fake news! I won many states!  I declared myself the winner.”

“Maybe, but Joe outranks you in the Illuminati, so I’m listening to him.”

“Sleepy Joe is a member of the New World Order.”

“Yeah, but due to a big oversight, he’s also a member of the Illuminati, and it’s too late to remove him.  Plus, the Global Master Councilor likes the chaos opportunities a Biden Presidency can create.  So he’s staying put and we’re not destroying Clow.”

A receptionist for Alexander-Basta said she was busy and could not be disturbed.

In the background, a woman who sounded like Trustee Watts, said: “I just declared my candidacy for Mayor of Bolingbrook.”

“I’m sorry,” said a woman who sounded like Alexander-Basta.

“Once you’ve been ripped apart by Roger’s campaign fund, Roger’s political action committee, the Something First Something Bolingbrook Something Party, and Bolingbrook United, your reputation will be ruined.”

“Nonsense!  I will win by representing the independent voices of Bolingbrook!”

“Just because your new party has the word “Independent” in its name, doesn’t mean it’s independent.  In fact, I’m going to have so much fun pointing out that your biggest donor so far is a Cook County Democrat and a political ally of (Chicago Mayor Lori Lightfoot.)”