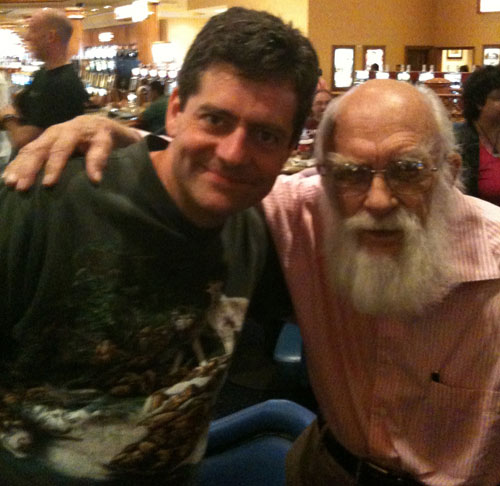 Jame Randi and me at Tam 8.

I wish this was fiction, but James Randi died yesterday. For decades he was the most famous advocate for skepticism.  From the 1970s on, he was often brought on by television to debunk psychics and other paranormal claims.  He was a frequent guest on Johnny Carson’s Tonight Show  His feud with Uri Geller was legendary and the source of three lawsuits and other legal threats.   He was one of the co-founders of the Committee for the Scientific Investigation of Claims of the Paranormal, which later became the Center for Skeptical Inquiry. He later went on to form the James Randi Educational Foundation, which hosted The Amazing Meeting, which was the premier event within the skeptical movement until the foundation’s restructuring in 2015.

He was the most famous founder of the modern skeptical movement, and he was the closest equivalent to their patron saint.  But he couldn’t prevent the movement from fracturing.  The “deep rifts,” his failure to stand up to the extremely problematic leaders of the movement, and the demise of the JREF under DJ Grothe lead to the downfall of what was a growing movement.

Despite his flaws, he did inspire many to embrace science and reason and reject blind faith in the supernatural.  He might have even inspired others to go further and reject a belief in God too.

I was one of those people he influenced.  His demonstrations and writings helped make the long transition from a believer to someone who tries to practice skepticism.  He was also one of the reasons I became involved in skeptical activism in Chicagoland.

I was fortunate enough to get to know him at two TAMs, and I got to introduce him to my future wife.  He said he liked my writing in the Babbler and was always friendly towards me.  I was fortunate to meet him just before things went crazy within the movement.

One of my fondest memories of him was the night before my first TAM.  We’d gathered at one of the South Point’s Casino’s bars to chat and drinks.  After about an hour, one person stood up and started clapping.  Others started to join him.  I looked around and saw that Randi by one of the stairs to the bar.  I joined the standing ovation.  For that moment, the conflicts in the movement–The religious versus atheist skeptics, the skeptics who favored expanding the scope of skepticism versus skeptics who feared “mission drift”– didn’t matter.  We were united in our love for James Randi and his work.  He was the reason we were gathered and the reason many of us embraced the cause of skepticism.

His memory and his example will be a blessing to me.