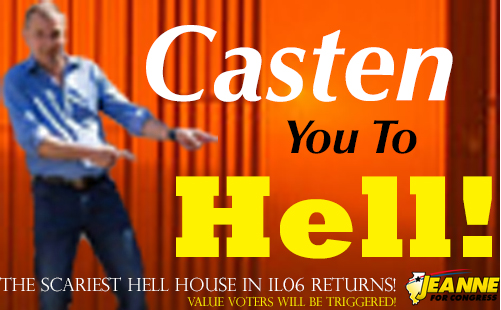 Jeanne Ives, the Republican candidate for Illinois’ Sixth Congressional District, will not be hosting her “Casten You to Hell” hell house this year due to statewide COVID-19 restrictions.

A press release from the Ives campaign stated: “Our governor, who doesn’t know Jesus Christ, is oppressing good Christians by banning our hell house!  Since we are forgiving Christians, we leave judgment of the governor to Christ the King. Our fearless volunteers will knock on every door in the Sixth District to show voters the horrors that will follow the reelection of (Representative Sean Casten.)”

According to sources, “Casten You to Hell” would have featured such “horrors” as gay marriage, Christians forced to smoke cannabis,  a vegetarian meal, children with tablets glued to their eyes, transgender employees, and an actor portraying Casten bludgeoning creationists with science books.

“Governor Pritzker thinks we should hold a hayride instead.  Just as he doesn’t understand the joy of bacon, he doesn’t understand that Hell Houses must be held indoors, and illicit as much screaming as possible!  We did our part and stayed at home for a little bit, and sometimes wore masks.  Now we demand that you let us show the Sixth District voters that they should fear gay adoption instead of the deadly fake China virus!”

Cindy, an Ives staffer who asked that we not use her real name, claims that the hell house was really closed due to virus concerns:

“We think Sean’s secret crew is releasing real viruses at our events to make the fake virus seem real, and to frame Jeanne as irresponsible for holding mask-less events during a pandemic.  Who knows what the Casten Crew would do to our hell house?”

“As much as I love playing a demonic rioter, basic training for Trump’s election day army starts this week.  I think Jeanne is going to lead the Sixth District Battalion’s march on the DuPage County Clerk’s office.  Let’s just say it will make the Brooks Brothers Riot look like a sandbox fight.  General Roger Stone will be proud of us!”

When reached for comment, Ives said:  “What a fake story.  You should report on real stories, like how Sean is hiding from me.”

“Um,” said a man who sounded like Casten.  “I’m right here, and we’re about to debate each other on the radio.”