Rep. Tulsi Gabbard used a two-finger takedown to push Bolingbrook Mayor Roger Claar to the ground during an Illuminati gathering.

“The word is ‘Fnord,’ civilian,” said Gabbard as Claar moved away from her.  “Not ‘Ford!’” 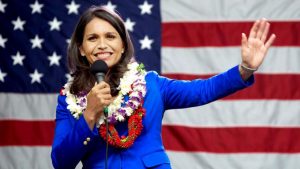 “The ‘N’ is silent!” countered Claar.

“It is not.  You are disrespecting our sacred order and showing insubordination to an Illuminated Knight of higher standing.  Say you’re sorry.”

Claar, through a spokesperson, stressed that he was not harmed, and has forgiven her.

“Tulsi is still Roger’s favorite Fox News Democrat,” said the spokesperson.  “He is not going to let a slight difference of opinion get in the way of his desire to destroy the New World Order, and run Bolingbrook without interference from state or national government.”

An Illinois Illuminati official, who asked not to be identified, said that while Gabbard was still upset over Claar’s pronunciation of “Fnord,” she was going to move on:

“She has to focus on how she’s going to spin her Independent bid to be President after telling the public she wouldn’t run as an independent if she didn’t get the Democratic nomination.  She doesn’t have time to worry about a suburban Illinois mayor’s inability to say, ‘Fnord.’”

Gabbard was at the Bolingbrook Golf Club for a ceremony honoring her lifelong commitment to the Illuminati.  Before the incident, Claar performed the Illuminati’s Sacred Glowing Orb Ritual with her, then said a few words.

“She’s a real fighter,” said Claar.  “Literally.  She still serves in the military.  But I’m really impressed by how she keeps fighting.  She has no paid staff in Iowa and is only polling at 1% nationwide.  Most people would have quit before for the first debate, but not Tulsi.”

Claar added that the Illuminati will pull Gabbard from the Democratic Primary, due to Sen. Bernie Sander’s defection to the Illuminati earlier this year.

“I just want to say that that I enjoyed watching the Democratic Primary on Tulsi time.  Why aren’t you guys laughing?”

Gabbard thanked Claar and the gathered dignitaries. She briefly talked about how her father had raised her to be a member of the Illuminati.

“My father tried to infiltrate the Republican Party in Hawaii, but then he realized that was a waste of time.  I learned that if I wanted to help our order, I needed to learn how to blend in with the Democrats.  Not only do I blend in, but I appeal to both the far right and the far left!”

Gabbard then turned her attention towards Hillary Clinton:

“I stand by my statements about her.  She is the embodiment of the wicked, corrupt system created by the New World Order.  I want to destroy her…In a debate of course.  She’s mistaken when she says I am a Russian asset.  (President Vladimir) Putin is my asset.  I am a loyal knight of the Illuminati.  I will fight until all nations are destroyed, and I can become the queen of Hawaii.  I will tear down those telescopes, and tell my people what they want!  I will say aloha to the our illuminated future.  Fnord!”

While the crowd chanted “Fnord,” Claar, according to eyewitnesses, chanted “Ford,” which lead to the incident.

In the background, a woman who sounded like Claar, said: “What are you watching?”

“Yes.  All Alyssia has to do is say a couple rhymes and she wins.  Here we go.”

“Can you do that in a rap battle?” asked Claar.

A woman who sounded like Oliver,  said: “You sound like an old school hack/And your rhymes are really wack/Time for you to face the fact/That Maripat is where it’s at.”