The New World Order selected Peotone, IL as one of three finalists for a new Chicagoland UFO Base. 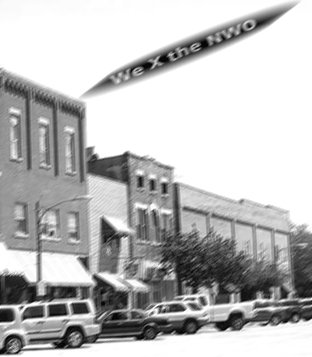 The selection committee wrote: “Being located in Will County, Peotone offers many of the advantages that Bolingbrook’s Clow UFO Base has without the disadvantage of being run by a traitorous mayor.”

After the Presidential Election, Bolingbrook’s Mayor Roger Claar switched his allegiance to the Illuminati and placed Clow under their jurisdiction.  Failing to remove Claar in the April election, the New World Order started planning a new UFO base.

A spokesman for the Peotone Village President Steven Cross, who asked to be called Carl, said the village is honored to be considered:  “We may never get the third Chicago Airport, but we have a good shot at this UFO base.  Hardly anyone will notice its construction, and the base will be underground.  That means our residents won’t be inconvenienced by the base,  unlike they would by an airport.”

Pamela Z. Stouffer, a spokesperson for Will County’s Interstellar Relations department, credited Will County Board Member Jacqueline Traynere for Peotone making the final three:  “She didn’t win the election against Roger, but she made a lot of connections within the New World Order.  Now we don’t want to get involved in the war with the Illuminati, but we can’t pass up the opportunity to be able to collect taxes from two UFO bases!”

The other sites up for consideration are the South side of Chicago, and Lake County.

Chicago Mayor Rahm Emanuel personally wrote the proposal for their site:  “What better way to stick it to Roger than to build a UFO Base in Chicago?  I will waive all taxes on interstellar trade if you promise to pay off our city’s pensions.  Unlike a certain president, we know how to make great deals for the right sentient beings.”

Lake County’s proposal is a classified number of smaller bases connected by subways lines.  Officials say that their plan will allow all of Lake County to profit, rather than one community.

“We get a lot of visitors from the solar system of the Lost Tribes of Israel,” said one county official.  “When they visit our many synagogues, they always complain about the car ride from Bolingbrook.  Under our plans, visitors can land in Lake County, then walk to the synagogue of their choice.  What a concept!”

Lake County started its “charm offensive” by inviting representatives of the New World Order to a party to celebrate their selection.  The Maxwell Street Klezmer Band performed a concert.  County officials, wearing paper bags, told jokes to entertain the audience, and poke fun at Claar and the Illuminati.

“So the Bolingbrook Village Board is touring the solar system in a UFO.  The pilot walks into the cabin and says, ‘There’s a problem with the engines.  We might have to bail out over Earth.’    The pilot goes back to the cockpit.  Trustee Robert Jaskiewicz gets a parachute.  Mayor Roger Claar grabs the chute.  He says, ‘I am Bolingbrook!  I have to live.’  Roger then jumps out the airlock.  Robert grabs another chute.  Trustee Leroy Brown takes chute from Robert.  ‘I have to live because Roger needs me.’  He jumps out of the airlock.  This happens with each of the other trustees.  Finally, Robert is alone, and the pilot returns.  Robert says, ‘I don’t understand why they grabbed my chute.  There’s more than enough for everyone.’  The pilot says, ‘I don’t understand why they jumped.  We’re still over Jupiter.’”