(CN: Hate speech by a fictional version of Milo Yiannopoulos.) 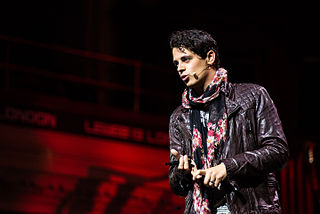 Over a thousand aliens were released after Clow UFO Base officials “required” them to attend a Milo Yiannopoulos speech.

“There’s a galactic treaty that bans torture!”  said Ivos, a resident of Kornix Confederation.  “(Bolingbrook Mayor Roger Claar) just violated it by forcing us to listen to a living random bigotry generator!  I’m filing a complaint with my ambassador!”

Yiannopoulos, a self-proclaimed Gamergate spokesperson and Breitbart editor, was invited by the Illuminati to speak at Clow as part of his “Universal Outrageous (explicative  deleted) UFO Base Tour.”  Promotional materials promised “an evening of politically incorrect lulzs by a man who will confuse your male appendages!”

While Milo’s speeches have attracted large audiences at college campuses, only six aliens had bought tickets the day before the event.  There were no tickets sold the day of the event.  It was at that point that Claar decided to make the event mandatory.

An anonymous source explained: “The contract states that any perceived walkout or boycott of a Milo event constitutes a violation of his free speech rights.  That could result in a loss of funding.  So we had to make sure the auditorium was full.  Otherwise he’d get mad, and we’d lose our Illuminati funding.”

“I’m not here because we’re the only Illuminati approved humanist organization in the world.  I’m not here because I agree with him.  I disagree with almost everything he believes in.  But!  This is a big but!  When feminists make me feel bad with their privilege lectures, he makes me feel good!  That’s why I absolutely support his absolute freedom to speak.”

Milo then entered the auditorium on a gold plated floating throne, surrounded by bored gay men wearing Speedos.  When Milo landed on the stage, Webber kneeled and handed him a Humanist of the Year medallion. Milo laughed, grabbed the medallion, then motioned for Webber to leave.

Sitting on his throne, Milo announced the title of his talk, “Mars Needs Humans.”  Though the Martian Colonists are universally accepted to be technologically ahead of the human race by 10,000 years, Milo argued that humans are really the more advanced species.

“Political correctness has corrupted the galaxy!  Thanks to the space feminists, you have been fooled into believing that martians are smart.  They’re not smart.  I’m going to say it!  They’re stupid!  Martians are stupid!  Isn’t amazing that I’m saying that!  But I am!  You know I’m correct!”

An alien interrupted.  “Excuse me!  I think you mean the Martian Colonists!  Native Martians never evolved beyond bacteria. The—”

“You interrupted me!  You dared to violate my right to speak freely?  Get him out of here!”

After the alien was removed, Milo’s servants walked among the audience to collect questions.  Instead of reading the questions to Milo, the men shredded them.

“Stop attacking Milo with fake facts!”  One of them yelled.  “You’re violating his free speech with these questions.”

Milo then said he would offer a preview of target of his next campaign: Intersex babies.

“I just want to protect women and children from having to see these (derogatory description deleted)!  So I’m showing you guys these pictures.  Maybe you can abduct their parents, and brainwash them to fix their kids!”

Before Milo could show the images, an alien ripped out her chair and threw it at the screen.  She screamed that he was a bully and picking on babies was a new low, even for him.  Security arrested her.

“Anyone else want to infringe on my free speech?”

Another alien screamed, “Drum circle!”  A drum kit appeared in front him, and he started performing a drum solo.  Other aliens started pounding on the chairs.  After several seconds, an Illuminati operative fired a taser at the alien playing the drum kit.  The alien started to slow down his playing, and swayed as if he was trying to stay awake.  Moments later, the alien pulled out the taser cords, and he started to play faster.  Many in the crowd cheered.  Finally, security broke through the crowd and arrested him.

Milo shook his head.  “Is anyone else here stupid enough to protest me?”

Almost all of the aliens raised an appendage.

Milo screamed, then pointed towards the doors.  “You’re protesting my right to free speech.  You’re refusing to tolerate my intolerance!  Well, you failed!  I’m still here!  Now get out!  Get out now.  But before you leave, just know that I’m unstoppable!  I got a trans woman to quit college, and I got a book deal!  I threatened to out undocumented students, and I got invited to Bill Maher’s show.  Every time you protest me, I am rewarded by serious men!”  He used his fingers to make a triangle.  “Fnord!”

Ivos was one of the aliens who raised his appendages.  “It was the only way we could escape.  Most of us couldn’t take any more of his gish gallop.”

Webmaster’s Note: After this article went to press, Milo lost his book deal and keynote speech at CPAC due to unearthed comments he made about Pedophilia.