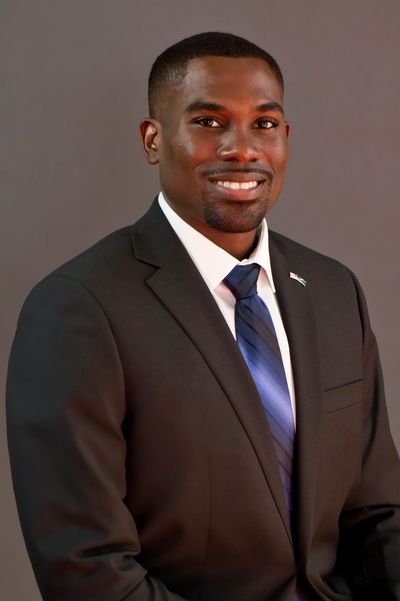 “This is a year of firsts!” Doris said at a press conference following his victory.  “I won my first election.  I met my first alien.  I took my first trip to the moon.  Now I’ve won my first Unobtainium medal! And the year isn’t over yet.”

The Interplanetary Goodwill Games are held once every 20 Martian years.  Sentient species from around the solar system compete in over 200 games, including track and field.  Doris competed for the Clow UFO Base team, which was one of ten teams from Earth that qualified to compete in the games.

While Doris had hoped to compete in the 2020 Olympics, he was glad he chose the Goodwill Games instead.

“It seems like the Tokyo games are trying to kill you, kill your career, or kill your ability to compete.  Here, I don’t have to worry about any COVID variants.  I can focus on having one last great competition.  Then I can look forward to my new career as the token Democratic member of the First Party for Bolingbrook.  As long as I don’t make any waves, I’ll have a long career with them.”

Doris fouled on his first two attempts.  His first attempt ended when his first jump, the hop, caused him to crash into the domed ceiling.  Though the collision resulted in a large bump on his head, he vowed to keep competing.

“As long as I still had aerial body awareness, there was no reason for me to stop competing. I just had to get used to the moon’s low gravity.  It’s hard when you’re not wearing a 180 lbs. space suit.”

Doris made the record-breaking jump on his fifth attempt.  At the time he was in fifth place, and told the only way he could win was to break the Lunar record.  Posci, a competitor from Jovian moon Io, was the leader with his 90-meter jump.

“This time I wasn’t afraid that I was going to launch myself into orbit.  I could only do that on an asteroid or comet.  So I thought about the physics of my angles, imagined that (Former Mayor Roger Claar) was chasing me, and then ran like hell.  When I didn’t fall asleep after the hop, I knew I had a chance to break the record, and I did.”

After thanking his family, Doris also thanked Mayor Mary Alexander-Basta for allowing him to compete in the games and the staff of the Babbler for inspiring him.

“I remember reading about aliens in the Babbler and wanting to compete against them.  My mother said if I worked hard, and proved my loyalty to Roger, my dream could come true.  Today it did.  Thanks to the Babbler for inspiring me, and thanks to Tony’s Fresh Market for sponsoring the First Party for Bolingbrook and myself. No matter how long you’ve been in business, staying fresh is the key to success for both Tony’s and the First Party!”

A receptionist for Basta said she was working from home due to the “substantial spread of the Delta Variant in Will County.”

In the background of the video call, a woman in a biohazard suit walked up to Trustee Sheldon Watts, a member of the Bolingbrook Independent Voices party.

“Charlene,” said Watts.  “What are you doing here in that biohazard suit?  You’re vaccinated.”

“Not against the Omega variant,” Charlene replied.

“Not yet, and I’m not waiting for a vaccine-resistant COVID strain to evolve before I start protecting myself.  But let’s talk about the real reason I’m here.”

“I’ll ignore that,” Charlene replied.  “I have a great idea to improve your standing among Democrats.”

“You know I’m trying to transcend both parties and be a truly independent voice for Bolingbrook.”

“And we know how that went over in the last election,” Charline replied.  “Anyway, you need to get #fercalicious!”

“It’s the hottest thing among Democrats who want to work on their climate fitness.  Just listen to Representative Sean Casten!”

Charlene started playing a video on her smartphone.

“Hold up!”  Watts yelled.  “This is one of your deep fakes.  Right?  A middle-aged congressman imitating Fergie to promote the Federal Energy Regulatory Commission?”

“You’re overthinking this!” replied Charline.  She then stepped next to Watts and held up her cellphone.  “Just channel your inner Will.I.Am and you’ll be a hit with the liberal residents on TikTok!  Mary and (Will County Board Member Jackie Traynere) will never put it down like you.”