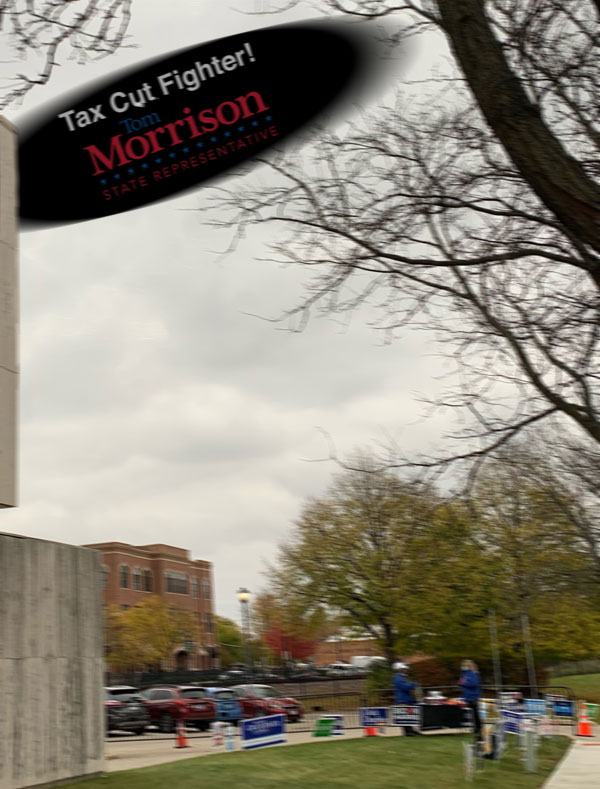 A UFO displays an ad for State Representative Tom Morrison.

The Village of Palatine fined a UFO crew for displaying a political ad for State Representative Tom Morrison while hovering over its early voting site.

“We don’t care if your spacecraft is 100 feet from the pooling place or 1 foot,” said Juan Z. Stevens, a spokesperson for Palatine’s Rob Sherman UFO Base.  “Visitors are not allowed to display political ads that are visible from a Palatine polling place.”

According to eyewitnesses, the UFO displayed its Morrison ad intermittently while hovering over the site.  Experts believe that one person out of ten waiting in line to vote might have seen the craft.

Corey, a Palatine resident, was one of them:  “I was going to vote for Tom anyway, but seeing his ad on an alien spacecraft made me feel better about my vote.  If aliens don’t think women should have equal rights, then Tom has an alien mind!”

Palatine resident Paula also saw the ad:  “That ad made me mad because that means there are homophobic aliens up there.  You can be a bigoted (expletive deleted) even if you’re from another world.”

Claudia Z. Marshal, a lawyer for the UFO Crew, says her clients plan on contesting the fine:

“My clients do not recognize the New World Order’s claim over Palatine’s air space.  They only acknowledge Clow UFO Base’s jurisdiction over all of Chicagoland. Clow, as most people know, is controlled by the Illuminati.  The Illuminati allows its visitors to display UFO ads, and Bolingbrook actively encourages the practice.  Palatine has no right to extort money from my clients!”

Marshal claims that the Morrison campaign is threatening to sue her clients over the ads:

“Yes, my clients changed the text of the ad from ‘tax fighter’ to ‘tax cut fighter.’  It was a simple misunderstanding because Representative Morrison opposes a law that will give 97% of Illinois residents a tax cut.  My client’s contact is clear.  No refunds, no matter how rich your supporters are.”

A campaigner staffer said Morrison was busy meeting with voters and could not be disturbed.

In the background, a man who sounded like Morrison said: “While you’re waiting to vote, I’d like to introduce myself.”

“I know who you are.  I’m your opponent, Maggie Trevor.”

“That won’t stop me from lecturing you.”

A receptionist for Bolingbrook Mayor Mary Alexander-Basta said she was busy and could not be disturbed:

“Please tell your readers to wear a mask so we can reopen our bars and restaurants.”

In the background, a man who sounded like Trustee Sheldon Watts yelled:  “Mayor Mary may be a trustee mayor abomination, but I forbid you to call her that!”

A woman who sounded like covert social media operative Charlene Spencer said: “Come on!  All the cool bots are doing it in Bolingbrook Politics. If you want to become the next mayor, you have to trust me.  You’re nice, but you can’t out-nice Mayor Mary.  You have to let me go QAnon on her.  You don’t how much trouble I went through to get access to the triple code.”

“I don’t care.  I can’t let you make such a vile and false accusation against a fellow trustee.”

“You’ve got it all wrong.  Thanks to Elon Musk, ‘pedo’ is legally considered a generic insult, like (expletive deleted).  We can’t help it if some voters jump to the wrong conclusion.”

“You’re using the abuse and exploitation of children to bully your political enemies.”

Space Force to expose its troops to COVID-19
Trump threatens to sell Chicagoland to Canada.
Village to produce ‘Snowy the Bolingbrook Skunk’ movie
God to smite Bolingbrook on 10/30/20

Village of Bolingbrook tells residents not to be afraid to vote (Fiction) » « FTB Presents: A Dark Web (Part 1)