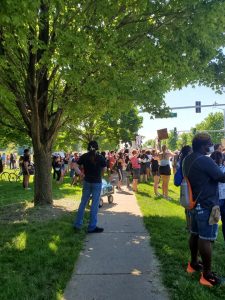 Bolingbrook survives the third day of protests! (Photo from an anonymous reader.)

After an unprecedented third protest this month against police brutality and for racial justice, Bolingbrook Mayor Roger Claar may replace current police officers with wereskunks.

According to documents leaked by sources within the Metropolitan Alliance of Police, Claar will use the cover of a “retraining program” to replace current police officers with local wereskunks.  The wereskunks will be paid with garbage instead of cash.  The documents also state that due to their strength and their bulletproof skin, wereskunk officers will not carry guns nor wear bulletproof vests.

“We feel that with minimal training, a wereskunk can resolve any criminal situation with fewer fatalities than with our current police force,” stated the author of the report.  “Plus, wereskunks have black and white fur.”

Village officials who confirmed the story say they have no choice.

“We’re surrounded!” said an anonymous village official.  “Our residents are peacefully protesting.  There are peaceful protesters in the suburbs.  Even Wheaton had a peaceful protest!  If we don’t do something, suburbanites will start demanding that police departments be eliminated, just like Minneapolis is planning to do.”

“We can’t be like Minneapolis,” said another village official.  “Who will we complain to if a neighbor plays loud music, or if we see a stranger in our neighborhoods?  This compromise will save our police department, and turn Black Lives Matter into another village festival!”

Peter, who claims to be a wereskunk, says most wereskunks favor the plan:

“Roger takes good care of us.  If we have to hunt jaywalkers to get free access to Bolingbrook’s garbage, we’re all for it!”

Sara, a woman who claims to be a wereskunk, said she opposes the idea:

“This plan will just shift the problem from racist cops to (expletive deleted) wereskunks.  Let’s face it.  Not every problem can be solved with the threat of arrest.  Imagine if social workers were first responders instead of police officers.  More humans might be alive or at least not be in jail if we did that.”

When reached for comment, a receptionist for Claar said he was busy, and could not be disturbed:

“Just between you and me:  The residents are leading the way on racial equality, and our politicians are finally starting to follow them.”

In the background, a man who sounded like Claar said:  “Of course we’re going to be cutting the police budget.  If we don’t get any help, we’ll have to cut every budget!”

A man who sounded like Trustee Michael Carpanzano replied:  “So we can play both sides!  Cutting the police budget will appeal to the protesters.  At the same time, we’ll appeal to the law and order voters by pointing out that (Will County Board Member Jackie Traynere) promoted a Black Lives Matter event before I approved it.”

“Wait a minute.  Are you trying to turn this crisis into an opportunity to promote yourself?”