Bolingbrook Trustee Michael Carpanzano formally apologized to Space Pope Lacoxo MMXI for dressing up like him and posing for a picture.

“I’m sorry his Holiness was offended by my attempt to celebrate religious diversity at Clow UFO Base,” said Carpanzano.

“Insulting me is a very expensive indulgence,” replied the Space Pope.  “Fortunately, I have very reasonable payment plans.”

“I will pay for him”, said Mayor Roger Claar.  “Now let’s pretend this didn’t happen.”

The incident occurred during Clow UFO Base’s “Faith in the Galaxy Festival.”  During the event, the Space Pope confronted Carpanzano about the picture.  The Space Pope explained that it was offensive to him.

“Why?” asked Carpanzano.  “I’m a positive person and I didn’t mean any offense.  Therefore you can’t be offended by what I wore.  You should feel honored.”

“Blasphemy does not honor me!” yelled the Space Pope.  The Space Pope then listed 100 dress code violations with Carpanzano’s outfit.  Notably that most of the crucifixes were upside down, and his hat was the wrong color for this section of the solar system. 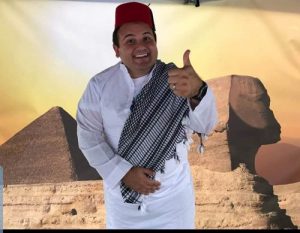 Carpanzano was unmoved.  “I’m married and have a family.  That means I can wear anything I want and you can’t be offended!”

Before the Space Pope could declare Carpanzano a heretic, Claar arrived and asked to speak with Carpanzano.  According to unnamed sources, Claar called Carpanzano “positively clueless” because his actions endangered Bolingbrook.  He explained that the Universal Catholic Church has its own military and a history of invading planets to forcibly convert the inhabitants:

“I don’t care if you like to dress up.  Just don’t offend one of the most powerful religious organizations in the galaxy!  Pick on weaker cultures, instead.  They can’t harm us.”

After his meeting, Carpanzano said he was going to move on from this incident:

“I know Muslims, and Jaime Olson has lost three elections.  Therefore it’s okay for me to dress up like a modern Egyptian!”