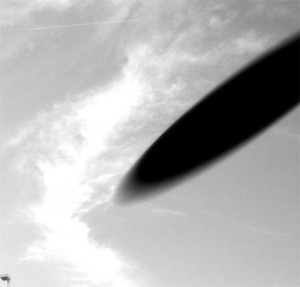 File photo of a UFO.

“It’s either we make them watch the ads,” said Zodole from Kepler-62f, “Or we have to pay double the normal abduction fee.  What choice do we have?”

Mary, who asked that we not use her last name, described her experience:  “I was floating in the air, and I thought I was having a dream.  After I went into the light, I found myself in a white room.  Peter then appeared in front of me.  He said that he wanted to talk to me while aliens were examining me.  I told him to release me.  He ignored me and started talking about his opponent Sean Casten and something about (Rep. Nancy Pelosi).  I said Nancy Pelosi never abducted me, and you just did.  Then he started talking gibberish.  I later realized I was really talking to a hologram, but it looked and acted just like Peter.”

Joshua, who also asked that we not use his last name, called the ad an uplifting experience: “At the time, I thought God took me to Heaven and revealed that he was really Peter.  So, that meant that all this time he wasn’t speaking nonsense.  He was speaking in tongues!  The real reason we hardly see Peter in our district is that if anyone looks at him too long, they’ll die.  Sadly, I later realized that I was actually watching an ad on a UFO.  Still, that means Peter is out of this world!”

Zodole said she hated the ads:  “Most of the time, the ads just upset our subjects.  I remember one woman who accused Peter of taking away deductions for state and local taxes so he could pay for tax cuts for the rich.  It’s supposed to be an interactive ad, but, honestly, I think something went wrong during the recording.  Either that or Peter really is mentally dense for a human being.”

Polly, a member of Liberate IL06, denounced the ads:  “Sean Casten’s campaign is hosting standing room only events.  Peter is so desperate for an audience that he has to ask aliens to force residents to watch his ads. We deserve better than the man who dictated Trump’s stupid tax plan!”

Bolingbrook’s Department of Interstellar Affairs, which regulates abductions in Chicagoland, defended running the ads. An unsigned statement from the department read: “We have always allowed advertising by our visitors. Ad revenue allows more visitors to conduct science experiments in Chicagoland.  Revenue from the abductions funds Bolingbrook.  Our taxes would be much higher without abduction revenue.”  The letter also refused to state who is paying for the ads but did say that  Roskam’s campaign isn’t paying for them.

Sean Casten refused to comment on the ads:  “All I will say is that I have never worked at Clow UFO base.”

A man then walked into the room, saying: “Your Mom and I are going to be working on a roast.  So we won’t see you for two weeks.”

“Dad!  You don’t need to work on a roast.  Help me make pub burgers instead.”

“The roast is a family tradition.  I have to defend it.  This will be the best roast ever!”

“I got in trouble the last time you made a roast.  Help me make a pub burger instead.  It will be fun, and you won’t be accused of food poisoning.”

“Don’t worry, Mr. Reporter.  We were not having a coded discussion about a Super PAC.”

Roskam could not be located in the district and did not reply to this reporter’s voicemails and emails.