Five undead Bolingbrook residents plan to picket Theater on the Hill’s auditions for their production of Night of the Living Dead: 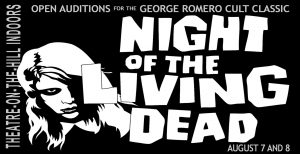 Theater on the hill will be holding auditions for their production of Night of the Living dead on 8/7/17 and 8/8/17.

“They’re using public property to enforce negative stereotypes about the undead,”  said Karen, a resident who has been “terminally living” in Bolingbrook since 1998.  “It’s bad enough that I can’t go to the movies or watch TV without seeing some grotesque stereotype about the undead.  Why does a theater company have to denigrate the undead?”

The Bolingbrook chapter of the Undead Society hopes to use their protest to 1) counter myths about the undead, and 2) to persuade the company to let a representative from the society address the audience after each performance.

“The living may treat this play like it’s harmless entertainment,” said Adam, who has been “terminally living” in Bolingbrook since 2002. “ To us, Night of the Living Dead is the equivalent to Birth of a Nation.  We don’t want to ban the production.  We just want the audience to know the truth about being undead.”

According to the society’s literature, Night of the Living Dead contains many inaccuracies about the undead.  They do not eat flesh, especially brains.  “Terminal Living” is not contagious, and the undead are not a sign of a “zombie apocalypse.”

“I’ve been shot in the head three times,” said Joan, who has been terminally living in Bolingbrook since 1966.  “Before Night of the Living Dead came out, everyone was cool with my condition.  Since that movie, I have lost my friends, and I’m confined to the basement.  If it weren’t for cable TV, I wouldn’t know what was going on in the world.  I’m so happy that my husband has been so supportive.”

Karen has tried to reach out to Theater on the Hill’s staff, but they hung up on her.  She also tried to speak with Mayor Roger Claar, but he refused to help:

“I told him about our situation, and he asked if we had donated to his campaign fund or Heart Haven Outreach.  I said we don’t have any money.  He asked if we voted for him in the last election.  I said no because the undead aren’t allowed to vote in Will and DuPage Counties.  He replied, ‘Then why are we having this conversation?’  The nerve of that man!  If Jackie Traynere had won, I bet she would have listened to us.”

Bolingbrook’s Department of Paranormal Affairs released the following statement:  “Although the undead do not have any rights in Bolingbrook, we will let them protest.  They must not tell people that they are not really undead.  We will incinerate any undead who disturb the peace.”

Claar and Theater on the Hill did not respond to requests for comments.

Though Karen says she has no future, she still hopes the protest will improve relations between the living and the undead: “Before my soft flesh completely rots away, and I can finally die, I want to see a world where the undead are respected as sentient beings and not seen as monsters.  Is that too much to ask for?”