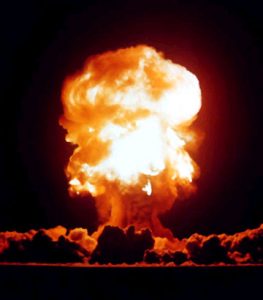 “It is just a coincidence that we decided to hold a nuclear attack drill for the first time in 24 years,” read a statement from Bolingbrook’s Department of Interstellar Affairs.  “We are not worried about a rogue nation attacking the village that Money Magazine named ‘one of the best places to live in America’.”

The drill started when all the TV screens switched to a “special report” broadcast.  Trustee Robert Jaskiewicz appeared on the screen:

Mayor Roger Claar then walked up to Jaskiewicz.

“You are supposed to be playing Kim Jong-un.”

“I think you have a better understanding of him than I do.”

“Whatever.”  Claar then turned towards the camera.  “For this drill, there is a North Korean missile with a nuclear-tipped warhead that will hit Bolingbrook in thirty minutes.  It begins now.”

At first, many aliens visitors didn’t know what to do:

“I thought the Earth custom was to raise your appendages in the air and scream,” said Lexopexo, from Tau Ceti.  “That’s followed by performing acts of vandalism, arson, and looting.  Before I got in trouble, a security officer said that Earthlings follow instructions if they don’t want to be killed.  Since he put it that way, what choice did I have?”

Many staff members, who spoke anonymously, said while they felt unprepared, and some of the procedures were out of date, the drill was a success.

One staffer was proud of her work.  “My job was to gather all the stray pets and children and to get them to a shelter.  You know how there’s always a stray child or pet in the movies that compels someone to risk their lives to save them?  Well, that wasn’t a problem under my watch.”

Oalpogoft from Pluto tried to get back to her craft during the drill.

“I told them that I could intercept the missile and save Bolingbrook.  They refused me access to my hanger.  They said that it was more important to keep aliens a secret to the public than to save thousands of lives.  I told them that was blezede up, but they replied that nuclear war was no big deal.  No big deal?  I told them to ask the survivors of Earth’s two atomic bomb attacks if it was no big deal.  The original inhabitants of Charon thought a nuclear war wouldn’t be a big deal, and now they’re extinct.  Duck and cover didn’t save them.”

After 30 minutes, Claar reappeared on the screens:

“The drill is over.  In our simulation, a 40 MT warhead struck Clow Airport.  We’ve estimated that 7,120 would be killed and 15,390 people would be injured by the blast.  Everyone inside the UFO base would have survived.  Now, had this been an actual nuclear strike, I would be in shock over the deaths of my loved ones and supporters.  Since this is only a drill, I can appreciate the positives.  According to our simulation, the Bolingbrook Golf Club and the Promenade survived the blast.  Survivors will be able to shop, and we can convert the Golf Club into a visitor’s center after we turn the blast site into a memorial park.  It will become a profitable tourist attraction.  Surviving businesses will have to hire new workers, but they can pay them less.  I’ll also have the authority to temporarily suspend the village charter, and rule by decree again.  Sorry, Stankowitz.”

From the webmaster: Chicagoland responds to Charlottesville (Mixed) » « Undead to protest Theater on the Hill’s production of Night of the Living Dead (Fiction)