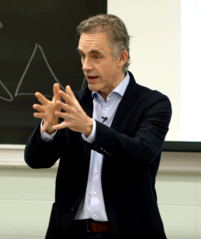 “The New World Order underestimated the power of his words,” said Simon, Grand Master Councilor of Western Canada.  “Our branch of the Illuminati didn’t, and today he is a potent weapon in our quest to create global chaos.”

Deputy Mayor Michael Lawler performed the glowing orb ritual for Peterson, then presented him with a medal.  It was Lawler’s first time performing the ritual, and Mayor Roger Claar, who was in the audience, nodded in approval.

Peterson wiped away tears as he accepted the award.

“I shouldn’t have cut onions before the ritual,” said Peterson.  The gathered officials laughed.

Peterson then thanked the Illuminati for the honor: “Honestly, I never dreamed I would get this far.  I thought I was going to be an ordinary professor and make some spare money selling self-help books.  When Simon approached me, I honestly didn’t take him seriously.  He promised to make me a messiah of masculinity. I just expected to sell a few more books.  This will be one of the few times I will admit to being wrong.  I now understand the full power of the Illuminati.”

He went on to talk about his followers: “They will follow me no matter what I tell them. I say there’s no such thing as an atheist, and atheists follow me.  I say witches and dragons are real, and skeptics follow me.  There are men who tell me that I am the voice in their head. I’m still amazed.  I am proof that if you act like a man, you can get anything you want and good things will fall into your lap.”

Peterson added that he has some idea of why he’s popular:  “The New World Order has imposed many changes on society, especially on gender roles.  These changes make men feel uncomfortable.  Thanks to our esteemed society, I can exploit their discomfort, and turn them into pawns for the Illuminati.  The Left makes them feel bad for exploiting women and minorities.  I tell them those people were never exploited, and if they gain rights, you will lose rights.  It’s sounds smart, and since they believe they’re smart, they won’t question me.  I make supporting traditional sexism sound like being part of the dark counter-culture!”

He then concluded by stating he agreed with the ultimate goal of the Illuminati.  “I tell my followers that chaos is feminine.  I say that because I believe that global chaos will give birth to a better world.  A world that will keep men on top.  A world where women and so-called minorities will enjoy freedom from choice.  A world that will be just like the classical civilizations.  We’ve made great strides since the election of Donald Trump.  Let’s keep the momentum going.  Fnord!”

After the speech, Lawler asked Peterson a question:  “You say you are opposed to equality of outcomes, yet you want all men to have sexual partners.  Isn’t that a contradiction?”